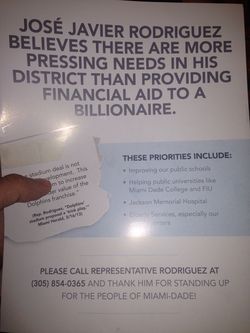 The Miami Dolphins are not the only ones sending political advertisements to voters asking them to support a May 14 referendum for a subsidized Sun Life Stadium renovation.

"José Javier Rodriguez believes there are more pressing needs in his district than providing financial aid to a billionaire," read the flier, apparently referring to Dolphins owner Stephen Ross.

But it's unclear who the pieces are coming from. Rodríguez said he doesn't know who's behind them.

A disclaimer on the mailers says they were sent by Citizen Alliance for a Strong Economy. An electioneering communications organization is registered under that name with the Florida Division of Elections. It had not reported receiving or spending any money as of March 31.

Public records show the ECO's treasurer, Michael Milner (or Millner, the spelling is inconsistent), owns the Harrisburg, Penn., home listed on the fliers as the group's mailing address. The group's registered chairwoman, Carmela Falcone of Melbourne, could not be reached for comment.

--with reporting by Douglas Hanks