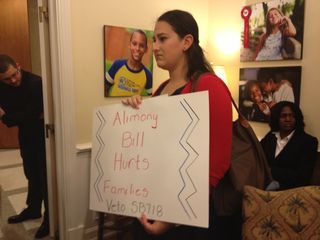 Gov. Rick Scott has less than a week to sign or veto the controversial alimony bill.

On Friday, two dozen women urged him to dust off his veto pen.

"If the governor wants to look pro-family, he should definitely veto this bill," said women's rights activist Barbara DeVane.

SB 718 would put an end to permanent alimony, and require judges to split custody evenly between divorcing parents, unless one parent could make a convincing case otherwise.

Maria Gonzalez, a Broward-based family law attorney, said the proposal would likely be found unconstitutional because some of its provisions are retroactive.

"A new bill could not and should not be permitted to undo contract rights," Gonzalez said.

"Every aspect of this bill is incredibly wrong," she said. "I'm truly concerned about the children. The 50-50 time share could put a lot of people at risk."

At a press conference earlier this week, Sen. Kelli Stargel, R-Lakeland, reminded reporters that the alimony bill had passed by a "supermajority" in both chambers. Would there still be enough support to override a potential veto? Stay tuned.