Bombshell request to Democrat U.S. Reps at forum: Can you stop dad from being deported at 4 a.m.? 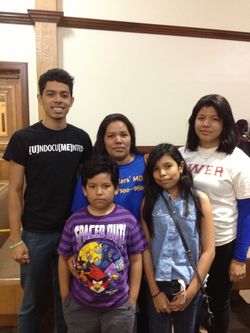 Carlos Rivas was told to keep it short when he asked the four members of Congress a question. They were hungry and the immigration forum in North Miami was running late.

“My dad, he was two months ago arrested by ICE. I have my family right here: My mom and my three brothers and sisters. We don’t know what to do, pretty much,” Rivas, 18 said.

“He’s about to be deported tomorrow at 4 a.m.” he said. “And I wanted to know what you could do for us because right now, I don’t know, I can’t even go to school because I can’t pay for it. I don’t know. What can you do? Is there any help you can try to give us?”

Rep. Frederica Wilson, the Miami Democrat who hosted the forum, was floored.

Wilson: “4 am in the morning? Why are you just telling us? We could have helped you perhaps. It’s too late.”

Someone from the audience of 200 or so citizens chimed in: “It’s never too late.”
“Who did you tell? Did you tell any congressmen?” Wilson asked. “You should have called our office. And we could have helped you.”

A family friend said they only learned of the deportation hours before.

“Let us go now and see what we can do,” Wilson said.

But it was just after 9 p.m., less than seven hours until Rene Rivas would be separated from his four kids and his wife by thousands of miles and a daunting immigration code. He's to be sent back to his home city: Durango, Mexico.

Suddenly, all the Democrats’ talk of making a difference, passing a new immigration-reform bill and advocating for the undocumented and the downtrodden became very real for Wilson, New York Rep. Yvette Clarke and Texas representatives Sheila Jackson Lee and Marc Veasey.

All are Democrats. And all are members in good standing with the Obama administration, which can halt a deportation. How much political capital do the Democrats have or are willing to spend? They'd have to interrupt their dinner in making calls to the White House, the Department of Homeland Security or Immigration and Customs Enforcement. They'd have to do all this for one man who, ultimately, broke immigration law --albeit to make his and his family's life better.

And they'd have to go to all of this trouble knowing Rene Rivas is one of thousands.

More than 1,000 people have been deported daily on average day under Obama, a record pace. And despite giving a break to college-bound illegal immigrants, the administration hasn’t appeared to ease up on deportations.

Republicans have criticized Obama for not doing enough to stop illegal immigration. The deportations, along with increased border patrol agents and more fencing, is Obama’s answer to the criticisms.

But it leaves families like the Rivases in a bind.

When Rene Rivas was arrested, he could no longer afford to pay for Carlos’s schooling at Miami-Dade College, which he began attending this year after graduating from Miami Senior High School.

Carlos wants to be a business major.

But now that he’s not in school, he’s in danger of losing the protection of what’s called “deferred action,” which shielded immigrants like him from deportation. Then there’s the matter of his mom, Ana and his sister, 17-year-old Karla. Like Carlos and his dad, they’re not lawfully here.

But the family came here 12 years ago, and that makes 5-year-old Alexis and 11-year-old Viviana U.S. citizens.

In the end, it’s an example of how much life and immigration are all about timing.

Their father had bad timing.

Carlos Rivas said his dad was busted after picking up an acquaintance on their way to work in the Allapattah section of Miami.

Rene Rivas, in detention, was fighting to stay in the U.S. On Monday, he was hungry.

“He was on his way to buy cookies,” Carlos Rivas said, “but his account that he we put money into so he can buy things like food was cancelled.”

“Why is my account cancelled?” Rene Rivas asked officials at the immigration detention center, his son said.

“That’s when they told him he was going to be deported,” Carlos Rivas added.

Once again, bad timing.
But perhaps the Rivas family caught a break. Though they got to the members of Congress late on Monday, they still had seven hours to work with.

And Wilson pledged to do what she could.

But will it be enough?