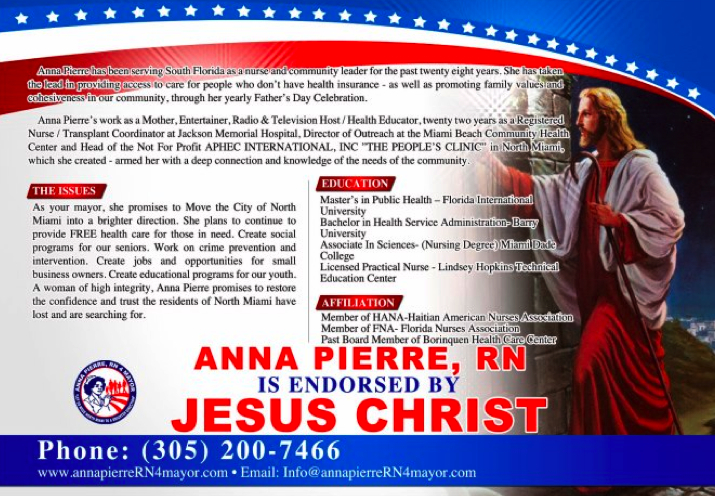 UPDATE** A North Miami mayor candidate who has previously said she was a victim of Vodou sorcery is says she's endorsed by none other than Jesus Christ.

"Anna Pierre, RN is endorsed by Jesus Christ," says a campaign-style flyer on her Facebook page, which says she'll advocate for "FREE healthcare" and social service programs for the elderly.

Reached on Monday, Pierre said Jesus came to her in a dream.

“I had a revelation when I was going to give up on this race. I had a dream, I know what I saw,” she said. “A figure I can’t explain told me, ‘Don’t be afraid, I am your friend. I am walking with you side by side. You are not alone.’ I felt it was from heaven. It was an endorsement by Jesus.”

Hat tip to Random Pixels who noticed the website first; here's our story.

So does another candidate, Joseph Haber, who's passing out campaign soap bars with the slogan "Let's Clean Up City Hall!"

In the wake of that, Pierre's touting of the Lord of Love's' endorsement comes just in time. 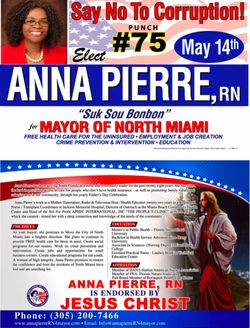 Last month, The Herald's Nadege C. Green reported that Pierre said unknown persons left chicken feathers, food scraps and candles at her office doorstep over the past three months. She believes the items are tied to mystical rituals in the Haitian Vodou religion.

“I found little dolls with needles in it. They put a lot of pennies at front of my office door,” she said. “I’m from Haiti I know what it is.”

Pierre, a nurse and singer, said her popularity in the Haitian community is a threat to whoever is trying to curse her. Pierre is well-known for her 1990s Creole-language hit “ Suk Su Bon Bon.” In the song, she demands that her husband put sugar on her “cookie” or else she will leave him.

She said the threats are not just of the spiritual nature.

Pierre said an anonymous person has been using a blocked number to call her phone. The voice on the other line told her to drop out of the race. 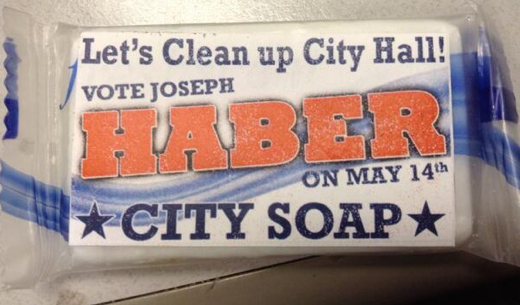