The party in the police state: Memorial Day weekend, race and badge-heavy feds 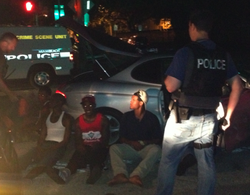 South Beach’s Memorial Day 2013 bash is a party in a police state.

Barricades line the South Beach streets. Mobile watchtowers rise on Ocean Drive. And packs of officers on foot, bicycles and ATVs keep the partiers — and even the guys grilling on the beach — in line.

The result as of Saturday afternoon: No one got shot, unlike in 2011. No one had his face chewed off, unlike 2012.

And few seem too concerned with a police presence. But many feel it’s a little too heavy and a little too targeted toward African-American youth, who have made Memorial Day on South Beach as big as it is controversial.

“A lot of people say it’s a hassle,” said Evan McCloud, a 30-year-old from Bridgeport Conn. “But it’s not that bad if you’re minding your own business.”

“It’s not like the police are just bothering people,” he said.

Moments later, a pack of bike-mounted police officers stopped to talk to him and his two friends as they cooked with two $4 Publix-bought disposable grills balanced on a section of wall between the beach and the promenade.

“No grilling,” one officer said. “You have to put that out.”

“I give you an A for ingenuity,” said another. Later, about 11:15 p.m. Saturday around Drexel Avenue and 14th Street, a gaggle of Miami Beach Police and at least one federal marshal had stopped 4 black males, pulled them out of their car and appeared to be searching it.

When I tried to get a photograph from a safe distance (a street corner sidewalk), one cop said " get the fuck out of here." That's when the record button on the iPhone was pushed.

Man, some cops sure hate cameras. Most of the good ones don't. They have nothing to hide. And most police are good, decent and hard-working people who have a tough job. But not all are.

A good example of a professional officer: Miami Beach Detective Juan Sam Pedro, who diffused the situation. A department spokesman said the agency has made sure that its officers respect the rights of the press after a run-in with a Channel 10 camera man in 2011.

"All Miami Beach Police Officers were trained into the 'do’s and don’ts' when it comes to picture taking in a public area by anyone including News Media Personnel," Robert Hernandez said.

The two officers who wanted all recording stopped were not city police, Hernandez said. It's therefore likely they were both with the marshal's service.

Of course, there will be those who think it's perfectly OK for police to command a person (reporter or simply private citizen) to move. However, it's well-accepted case law in Florida that a person has the right to photograph a public scene in public, provided it doesn't interfere with law enforcement's legitimate investigation. In this case, I was well away from the crime scene, and there was no threat.

And had I been allowed to photograph from the safe distance away, there would have been no confrontation -- and no video.