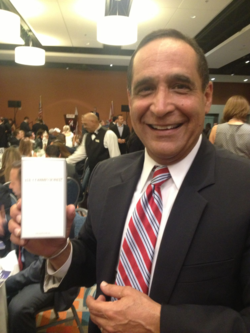 A gift sat on each table at the Miami-Dade Republican party's annual fundraising dinner Friday night: a bottle of men's cologne, encased in a white box wrapped in shiny cellophane.

It started off largely in jest.

Before he left his commission post last year, after an unsuccessful run for county mayor, Martinez toured Concept II Cosmetics, a Doral fragrance manufacturing business. The company created a scent in his honor, which Martinez intended to share with a small group of family and friends, he said.

But then he figured, why not spring for a bigger batch?

Martinez unveiled the cologne in a Facebook post in February -- the same one in which he announced his plans to challenge Democratic Congressman Joe Garcia next year.

"Those of you who have met me, know that it is a clean, lasting and memorable scent," he wrote.

The back of the 100ml cologne box even quotes Martinez: "There's no future in quitting."

This post has been updated with the price of the a cologne bottle.