A Hialeah political tale: How a chopped up electrical pole ended up inside a car 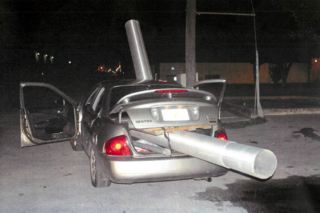 In Hialeah, every political blow is always followed by a similar one or an even harder one.

The day after El Nuevo Herald ran a story about Juan Santana, a candidate for Hialeah city mayor who filmed the verbal attack against him from a former police officer close to Hialeah mayor Carlos Hernández, authorities revealed that his wife was arrested nearly two years ago for stealing a public electrical post that was cut in half so that it could be transported in a car.

Santana’s wife, Jessica Montanez, 27, was arrested together with Jonathan Román, 25, the night of Aug. 16, 2011, after placing half of an aluminum post in the trunk of a Nissan Sentra and the other half through the sliding roof of the small car.

“Stealing metal and scrap metal is a national epidemic. However, we had never seen a case as daring as this one,” said Carl Zogby, a spokesman for Hialeah’s Police Department. “We had never seen anyone loading a post cut to pieces in a passenger car. “How could they think that no one would notice?”

The incident came to light in the wake of a political controversy in Hialeah after revealing the videotaped by Santana in which former police officer Glenn Rice mocks the candidacy of Santana, a disabled 30-year-old who weighs nearly 500 pounds.