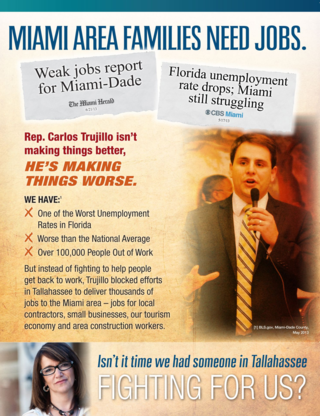 The billionaire owner of the Miami Dolphins has unleashed his second round of attacks against three Miami lawmakers he blames for standing in the way of a proposed $350 million renovation to Sun Life Stadium.

The group mailed its first batch of fliers last month, shortly after Ross formed it, making good on his pledge to take an active role in Tallahassee politics following the football club's failure to get legislation passed to ask Miami-Dade voters to raise the hotel-tax rate to fund some of the stadium improvements.

The ballots received during the special election before it was called off showed the proposal failing among early voters. Mike Dee, the team's former CEO who left for the San Diego Padres earlier this month, said in May that the Dolphins do not intend to pay for any upgrades on their own.

Ross' campaign prompted a rebuke from leaders of the Florida Legislature, who blasted the real-estate developer and part-time Palm Beach County resident for going after the trio of Miami Republicans.

"The fact that there are people who are attacking members of your community, your representatives, because they stood on principle, is wrong," House Speaker Will Weatherford said in Miami last month. Ross has laid the blame of the Dolphins' failure squarely on the shoulders of the powerful Wesley Chapel Republican.

The latest fliers, mailed to voters in the legislators' districts, refer to generic jobs and make no mention of the Dolphins or the football club's failed Tallahassee effort. 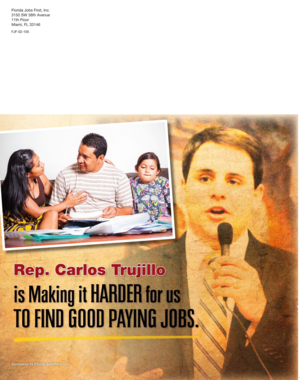 "Rep. Michael Bileca is making it harder for us to find good paying jobs," one of the fliers says. Later, it adds: "Bileca blocked efforts in Tallahassee to deliver thousands of jobs to the Miami area -- jobs for local contractors, small businesses, our tourism economy and area construction workers."

The flier attacking Trujillo has the same text. He and Bileca were perhaps the most vocal opponents in the Florida House of Representatives against the Dolphins' plan, which died when the chamber did not take it up for a floor vote before the end of the annual legislative session.

The flier against Diaz, however, is slightly different. Diaz, who has said he purposefully avoided vocally opposing the Dolphins, has said he is considering running for Congress.

"Our state Rep. Jose Felix Diaz only cares about one job in Miami-Dade. His own," the flier reads. "Diaz is eyeing a new, higher paying, taxpayer-funded job in Congress, despite outrageously blocking recent efforts in Tallahassee to bolster our local economy and bring 4,000 new private-sector jobs to Miami-Dade for us."

This post has been updated to refer to Florida Jobs First as a political group and not a political action committee, since it has not registered as such. (More on that here.)