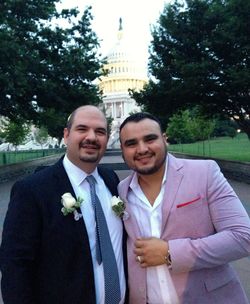 Christian Ulvert, the Florida Democratic Party's new political director, married his partner Carlos Andrade in Washington, DC last week in a ceremony that they couldn't have in their home state.

"Getting married in DC was a natural choice for us because Carlos lived in DC for a year and my passion for politics made it a perfect choice," Ulvert said. "It also symbolizes how far we've come in a short period in moving forward with marriage equality."

But it has only gone so far in Florida, where voters overwhelmingly approved of a state-constitutional same-sex marriage ban in 2008. The ban remains on the books. Dislodging it will be tough because, though public sentiment appears to have shifted in favor of same-sex unions, the constitution can only be changed with 60 percent approval by voters.

Ulvert is keenly aware of the political challenges. He was tapped to be the Democrats' political director this April after he helped the party win nine seats in the Florida House last year. He has worked on statewide campaigns with Democrats and a Miami-Dade slot-machine referendum effort with Republicans.

Ulvert, 31, was born and raised in Miami and Andrade, 33, is native of Venezuela.

Together for three years, their relationship took a more-serious turn after the U.S. Supreme Court invalidated the federal Defense of Marriage Act. Joined by a few family members and friends, they were married July 19 at the Liaison Hotel, a block from the US Capitol.

"After the Supreme Court struck down DOMA, we decided to get married because it was the first time that we would be recognized as a married couple," Ulvert said. "Though living in Florida means our home state still lags behind in affording equal rights to every Floridian, knowing that the full weight of the federal government stood behind our marriage is why we decided to get married."