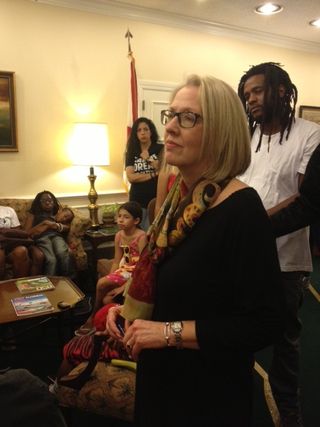 The head of Florida’s juvenile justice department cleared her calendar Monday to meet with the young activists camped outside of Gov. Rick Scott’s office.

Juvenile Justice Secretary Wansley Walters spent the morning and early afternoon fielding questions from the group -- and discussing the steps her agency has taken to prevent young people from entering the criminal justice system.

But the activists, known as the Dream Defenders, held firm on their commitment to remain in the Capitol until Scott convenes a special legislative session. They want Florida lawmakers to create a Trayvon Martin Civil Rights Act, which would repeal the state’s controversial Stand Your Ground law, end racial profiling and discourage zero tolerance policies in schools.

The Dream Defenders criticized Scott for not holding a public event Sunday, despite calling for a statewide day of prayer and unity.

Melissa Sellers, a spokeswoman for the governor, said Scott spent Sunday morning at Bible Based Church in Tallahassee.

“It was his personal time of worship,” she said.

Sellers said Scott had participated in a conference call with 35 faith-based leaders on Friday. He asked each to include a call for peace and unity in their Sunday sermons.

The Dream Defenders, a coalition of college students and young professionals from around the state, have spent the past seven days and six nights outside of Scott’s office. Their sit-in demonstration is a response to George Zimmerman's recent acquittal in the shooting death of Trayvon Martin, an unarmed black teenager.