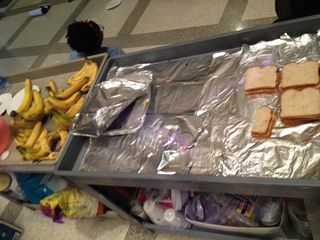 Capitol Police on Saturday refused to allow deliveries of food and bottled water to the 60 young protesters camped inside the building, the group's leader said.

Capitol employees were allowed to bring hot meals to the protesters last weekend, said Phillip Agnew, whose Dream Defenders have spent the past 12 days in front of Gov. Rick Scott's office.

But when a staff member showed up around 2 p.m. Saturday with cold cuts and bread, the police refused the delivery, Agnew said.

The group has enough packaged bagels and bananas to last through Saturday night, Agnew said. But they expected to run out of food by Sunday morning. Bottled water was also in short supply.

"We knew this wasn't going to be easy," Agnew said. "But if we don't get some food soon, we are going to have a lot of really hungry people."

"We haven't changed anything," Plessinger said. "The rules remain the same."

Agnew could not provide further details on who had tried to provide the food and why they were turned away.

Still, on Saturday afternoon, the group took to Twitter to alert its 8,200 followers that they couldn't get food.

"FDLE (capitol police) won't allow meals to come in for us to eat!," @Dreamdefenders tweeted at 3 p.m.

An hour later, they tweeted: "One of the female officers told us that if we're hungry that we can leave."

Responses to the alert were swift, coming in from across America.

The Miami-based Dream Defenders say they won't leave until Scott convenes a special session on the Stand Your Ground law and racial profiling -- a demand the governor has repeatedly refused.

The group began its protest on July 16, three days after neighborhood watchman George Zimmerman was found not guilty in the shooting death of Travyon Martin, an unarmed black teenager. Singer and civil rights activists Harry Belafonte joined the group Friday, but was not among the 105 activists who stayed overnight.

On Saturday morning, FDLE released an memo estimating the overtime costs for Capitol Police since the sit-in began as $57,971.