« With Fasano neutral as GOP fights over his successor, Dems may have shot | Main | Sen. Soto pitches his own plan for teacher debit cards » 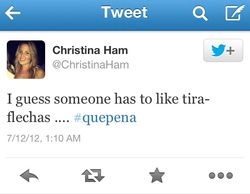 In addition to trashing old people and constituents on Twitter, an aide to Miami mayoral candidate and City Commissioner Francis Suarez also hurled what many see as a racially tinged insult: "tira flecha."

The phrase, which literally means "arrow thrower" (but loosely translates as "spear-chucker" to some) is frequently used by people of Cuban descent in Miami to refer to those who look like Native American Indians -- particularly South or Central American -- but it's also less commonly used to refer to an ignoramus.

The exact context of its use by Suarez's aide, Christina Haramboure, isn't clear because she won't return an email about it.

A friend replied:"HAM is going HAM!" (a pun off her Twitter handle, @ChristinaHam, and the abbreviation for the phrase "Hard as a Motherfu-ka").

Haramboure's response: "tony, you have no idea, but someone is about to find out, #dassit."

Haramboure, a 24 year-old special aide and administrative assistant, abruptly cancelled her Twitter account Tuesday when reporters from The Herald/El Nuevo contacted her and Suarez about her tweets from the day before that bashed "angryoldpeople" and criticized those who complained about garbage service. She said in one message that some constituents needed a "lobotomy."

“I regret the Twitter postings and I apologize to anyone I may have hurt," Haramboure said in an email about the constituent-bashing tweets. Story here.

Suarez said at the time that she offered to resign, but he kept her on because she does good work and this was a "mistake." Haramboure began working for Suarez in 2011.

“This has come to light now because I’m in a political election,” Suarez said.

There are some tensions (see this column about how "Nicaraguan" was used as a slur in one state House race), and many don't find "tira flecha" as anything but a racial insult. One Miami-based political consultant, for instance, once told me about how a former state legislator of Cuban descent used the phrase as a racial offense (the pol denied it, but witnesses confirmed it and no one wanted to go on the record).

After the initial bout of Haramboure's constituent-bashing tweets came to light Tuesday, Regalado held his tongue.

But with the latest revelation, there's more of a chance he'll make his rival suffer the slings and arrows of political fortunes on the campaign trail.