Garcia to health care forum: leaving $50 billion on the table is 'irresponsible' 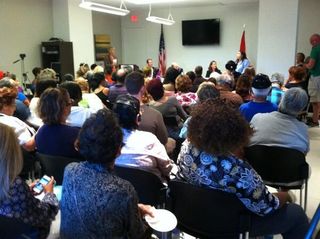 Garcia, a hospital administrator, told the crowd he isn’t happy that Florida legislators left more than $50 billion in federal money on the table rather than using it to expand Medicaid coverage to many of the state’s uninsured.

“It doesn’t matter what side of the issue that you fall on, I thought it was imperative that we accept those dollars,’’ he said to applause.

“To say that, sometimes I go against my own party,'' he said, a reference to the Republican-led legislature's failure to find consensus amid fierce resistance from conservatives in the House. "The fact that there is millions of dollars waiting to come to the state of Florida and we’re choosing not to take it is irresponsible.” Here's the video from Florida Health Watch.

Rodriguez attributed the large crowd to the desire by people to learn more about the pending decisions they'll have to make in the coming months -- many of them for the first time -- about signing up for health insurance.

"We're one of the states that's worse off because our leadership told agencies not to start getting ready for implementation,'' he said. "So the real challenge is to get the information out there."