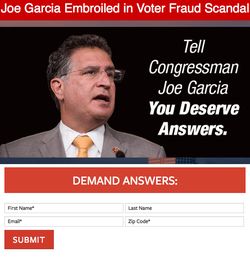 Remember that absentee ballot-request fraud that claimed the jobs of two former aides and a campaign chief for Congressman Joe Garcia?

If you live in District 26, the National Republican Congressional Committee won't let you forget.

After running Spanish-language radio spot and touting a YouTube web ad, the NRCC is buying up digitial banner ads so that web surfers in the district see the message: "Joe Garcia Embroiled in Voter Fraud Scandal...Tell Congressman Joe Garcia that You Deserve Answers." Those who are so moved can then do just that: Send in a message to Garcia.

And, yes, there's one in Spanish as well.

So far, the scandal hasn't appeared to hurt Garcia, who quickly moved to sit down with prosecutors and say he had no knowledge that his top advisor, former campaign manager and spokesman were requesting the absentee ballots of other voters without their permission. Garcia's fundraising last quarter was solid, and a Republican poll indicated he'd still win re-election.

But there's more than a year of this to go. And the NRCC shows no signs of giving up on this competitive district that Garcia won from a Republican, David Rivera.