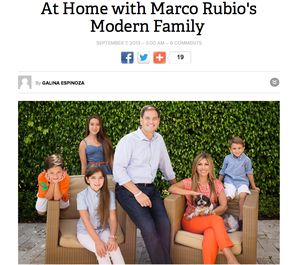 The tea party backlash against Sen. Marco Rubio for his stance on immigration has been covered to death. And the backlash might be, in fact, dying as the issue fades amid debates about Syria, Obamacare and the federal budget.

The first dropped this weekend in PARADE, a newspaper insert read by an estimated 63 million Americans, making it the most-widely read magazine in the country.

"At Home with Marco Rubio's Modern Family," said the headline of the piece replete with Norman Rockwell-meets-Miami photos of the telegenic Rubios, a video package and personality-based reporting.

The toughest question appears to center around Rubio's likely decision to move out of West Miami to Washington, where his evolution into a Washington politician will be complete.

“It’s not about moving out of Florida; it’s about being able to go home to your family at night," the Republican told Parade. "My most important job isn’t senator. It’s father.” 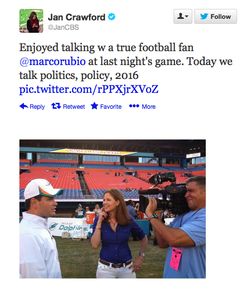 Last week, Rubio was spotted with CBS national news crew cameras in tow at a Miami Dolphins game. Expect that feature to drop soon as well, albeit it'll be a little more newsy.

To the degree Rubio lost support in conservative media, it's a good bet that mainstream coverage like this will more than compensate.

From a purely political point of view, Rubio might have gained more by backing immigration reform, taking fire from the far right only to make up ground in the center. That could pay dividends not just in a future general election but in a GOP presidential primary as well. That's if Rubio announces his candidacy, which would differ in substance and style in parts from fellow possible candidates/senators, Ted Cruz and Rand Paul.

Rubio sided with Paul and Cruz in disfavoring President Obama's call to bomb Syria, however his position appeared far more nuanced than Cruz's and less isolationist than Paul's. Rubio is more of a foreign policy hawk, and his main concern about a Syria strike is that it's too late and could do more harm than good.

Rubio's presentation and reasoning won plaudits from some on the right who had previously criticized his handling of immigration.

A review of the past two years of Rubio's statements and press releases indicates the senator never explicitly called for "military strikes," and Cupp changed her article shortly after the matter was brought to her attention.

Rubio did say at a Brookings Institute speech last year that "we should be seeking to help the people of Syria bring him down," but unlike co-speaker and then-Sen. Joe Lieberman, Rubio didn't explictly call for bombing (he did so for Iran, however, in some circumstances). Download Brookings

Aside from turns of phrases and specifics about policy, running for political office is about image. And few things beat the pictures of the head of a telegenic family talking about the American Dream in PARADE, or a Dolphin fan rooting for the home team on CBS.