« State education board to address next commissioner | Main | On Fox News, Pam Bondi talks tough (but wrong) about 'navigators' » 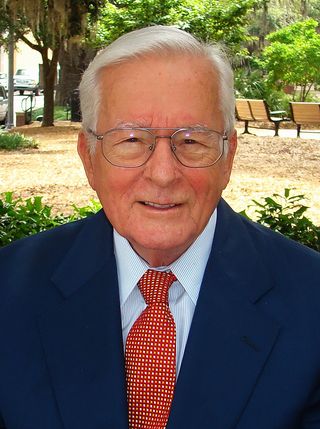 William Dexter Douglass, a wily Tallahassee lawyer and gentleman farmer who served four governors, two presidents and was revered for his legal mind, died Monday. He was 83.

Douglass had recently undergone aggressive radiation and chemotherapy as treatment for bladder cancer. He is survived by his wife, Therese, three daughters and several grandchildren. He was preceded in death by his son, William.

Born Dec. 6, 1929, in Holmes County, Douglass was among the last of a breed of Florida public servants who guided the state from its rural roots to the diverse, multicultural mega-state that it is today.

Douglass served as chairman of the Florida Constitution Revision Commission in 1997-1998, working to update and reshape the Florida Constitution. As general counsel to former Gov. Lawton Chiles, he was instrumental in putting together the legal team that led to the landmark legal settlement against Big Tobacco. During the 2000 election year recount in Florida, Douglass served as lead counsel to former Vice President Al Gore.

“Whether he was drafting an enlightened constitution or representing someone’s yard man for free because he needed help, Dexter worked always to make life better for regular folks,’’ said John Newton who served with Douglass on the legal team. “His brilliance and strategic insight quickly converted the entire Gore Re-Count legal team into admirers.”

Douglass, whose could trace his family’s Florida roots to the early 1800s, never forgot his family struggles growing up during the Great Depression. He prided himself on finding a way to represent clients even if they couldn’t pay.

“A secretary might come in and say Isaac's here with a tub of turnips for you," he told the St. Petersburg Times in a 1996 profile. "People from New York don't understand that. Turnips is all he's got."

He met Chiles at the University of Florida in 1953, where they both attended law school after serving in the Korean War, each imbued with a sense of daring and invincibility that shaped their careers. They remained lifelong friends, with Douglass serving as the governor’s general counsel and remaining as one of his closest advisers throughout his eight-year term.

Douglass built a legal career arguing before both federal and state courts on issues ranging from First Amendment to school vouchers to civil rights cases.  He was named one of the Best Lawyers in America in three categories and, in 2006, he received the Florida Bar Foundation Medal of Honor for "a career spent providing legal services to the powerless.”

Talbot "Sandy" D'Alemberte, the former head of the Florida State University law school, was a long-time friend of Douglass. "We have lost a great Floridian and a great story teller,'' he said.

Former Gov. Charlie Crist, who as a state senator sparred with Douglass over the tobacco settlement, said that during his tenure as governor, "I came to lean on Dexter for his sage counsel and wisdom.  I really respected and loved him. Floridians will long be grateful for his service to the state he loved."

For all his gentility and Southern charm, Douglass was also the kind of lawyer politicians hired to keep them out of jail.

He represented a Supreme Court justice facing impeachment, a comptroller charged with income tax evasion, a state legislator accused of sexually harassing a staff member, a state senator charged with soliciting bond business from a state agency, several state legislators charged with taking illegal gifts and trips in the 1980s, and the University of Florida basketball coach who was forced out of his job amid investigations by the NCAA.

In his early days, Douglass was known to celebrate his courtroom victories with a cigar and a scotch and cognac. But, he told the St. Petersburg Times, that practice ended one night in 1974 when he crashed into "a drunk tree" on a trip to buy cigars. A forgiving sheriff's asked he he’d been drinking.

“I said why in the hell do you think I hit that tree?" Douglass recalled. The deputy drove him home without giving him a ticket.

"I never joined the AA. I joined the Douglass Association,’’ he said. “My wife said she'd consider kicking me out if I didn't quit drinking."

Next to law and politics, Douglass’ passion was his cattle. He built a 300-acre farm eight miles north of Tallahassee, Anhinga Farm, where he raised and bred prize polled Herefords.

“He was always trying to build a better type of Hereford,” said longtime friend, William Jablon, headmaster at Maclay School.

“Dexter was one of the brightest people I ever knew,’’ said Lucy Morgan, former Tampa Bay Times bureau chief. “Sometimes he didn't like what we wrote about him or his governor and he would let us know. Several times he and I had shouting matches over the phone but the next time I'd see him it was as though we had never argued.”

Douglass also served on numerous boards in his career, including the University of Florida Foundation, University of Florida Law Center Board of Trustees and Maclay School. Appointed by four Florida governors to the Board of the Florida School for the Deaf and the Blind, Douglass served for 16 years as both a member and as chairman. He was appointed by President Lyndon Johnson to the Advisory Board for the National Technical Institute for the Deaf.

Douglass “never prepared an obituary,’’ Jablon added. “He never thought he was going to die.”