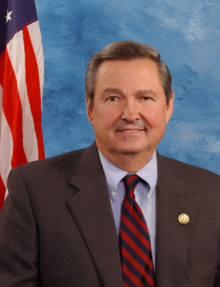 Shaw, a Republican and former Fort Lauderdale mayor, served in Congress for 26 years. He is survived by his wife 53 years, Emilie, four children and 15 grandchildren.

“It is with heavy hearts and profound sadness that our family announces the passing of our loving husband, father, grandfather, congressman and mayor, E. Clay Shaw, Jr. Clay Shaw passed away on Tuesday, September 10th at Holy Cross Hospital surrounded by family and following a courageous battle against lung cancer,” said a statement released by Shaw’s family.

“Clay cherished his time in the U.S. Congress representing the people of South Florida. He was a devoted family man setting a fine example for our 15 grandchildren. They will always be proud of Clay’s love of country,” said Emilie Shaw.

Shaw championed welfare reform in the 1990s and was popular in a moderate, coastal district that at various times included parts of Miami-Dade and Palm Beach counties. The bridge over the Intracoastal Waterway on the 17th Street Causeway in Fort Lauderdale bears his name -- a symbol of his effectiveness at bringing home the bacon to his Broward County constituents.

He personified a more civil style of politics, and voters in coastal Broward continued to elect him year after year, though he had some memorably tough and hard-fought races. In 2000, Shaw narrowly defeated Rep. Elaine Bloom of Miami Beach. In the reapportionment year of 1992, he prevailed in a rough-and-tumble race against then-Senate President Gwen Margolis.

Shaw ultimately lost his seat in 2006 to Democrat Ron Klein of Boca Raton. Shaw also was one of a number of prominent Republicans considered for Florida's vacant U.S. Senate seat in 2009, but then-Gov. Charlie Crist chose his former chief of staff, George LeMieux.

Shaw served as a city attorney  and city commissioner before he was elected mayor of Fort Lauderdale in 1975. Throughout his tenure he was known as a politician who had genuine and strong relationships with other elected officials -- including Democrats. Even as Broward became an increasingly Democratic stronghold, he was that rare elected Republican in Broward who many Democrats spoke positively about.

Fort Lauderdale Mayor Jack Seiler, a Democrat also known for reaching across the aisle, described Shaw as a man who epitomized public service.

“He did it in a very collegial way. He did it in a very dignified way,'' Seiler said. "You’d be hard pressed to find anybody who told you he did anything rude or disrespectful. He was the ultimate public servant. He did a fabulous job for the city of Fort Lauderdale whether as mayor or in Congress. He was always focused on Fort Lauderdale -- not the Republican  Party not the  Democratic party. It was Fort Lauderdale. He had an unbelievable working relationship with the Democrats not because he agreed with them but because he respected their opinions and he respected the debate.”

U.S. Sen. Marco Rubio, R-Miami, said: Shaw “epitomized everything a public servant should be and made South Floridians proud.  I was always impressed by Clay’s work on the causes he was most passionate about.  Clay’s impact on America will forever be felt through the important reforms he championed on welfare reform, Social Security reform and Everglades restoration."

U.S. Rep. Mario Diaz-Balart, R-Miami, called Shaw "a true family man and his relationship with his wife, Emilie, was inspirational." As dean of Florida’s Congressional delegatio, Shaw "went beyond that – he was a mentor and friend to all,'' Diaz-Balart said.

Former congressman, now Commissioner of Agriculture Adam H. Putnam recalled how he had worked with Shaw while in Washington.


“Florida lost a great advocate and public servant when Clay Shaw was called home last night,'' Putnam said in a statement. "I had an opportunity to work on a number of issues with Clay, but his greatest love was always his family. Melissa and I send our prayers to Emilie and the Shaw family.”

In 1975, at the age of 36, Shaw became the mayor of Fort Lauderdale. In 1980, he won a seat as a freshman lawmaker in Congress representing the 22nd congressional district, which then included Miami-Dade, Broward and Palm Beach counties. He would go on to win re-election 12 times over the following two decades until 2008 when Democrat Ron Klein beat him in a bitter campaign.

In the House, Shaw served on the Judiciary committee for eight years before moving to the powerful Ways and Means committee.

In 1994, when Republicans won control of the House from Democrats, Shaw became chairman of a subcommittee of the Ways and Means Committee, a position that included authority over welfare issues. His 1993 bill — a proposal to end the federal welfare program and remove recipients after two years from the rolls and require them to work — became a major provision of the Contract with America and marked one of the most dramatic changes in American public policy. In 1996, the welfare reform bill was signed into law by then President Bill Clinton.

Following the 1998 election, Shaw took on another big issue — Social Security — after becoming chairman of the House Social Security subcommittee. Among the legislation he got approved was a bill repealing the earnings tax on Social Security recipients age 65-69. He later sought to give workers the option of devoting part of their earnings for personal retirement accounts beyond Social Security. Democrats pounced on the idea as a move to privatize the Social Security system.

In 2000, he barely edged state Rep. Elaine Bloom — winning by only a few hundred votes — in one of the most expensive House races in the country. Following the election, lawmakers the congressional district lines were redrawn with Miami-Dade removed.

He will be buried at a family graveside in Cuba, Alabama. A memorial service will take place in Ft. Lauderdale at a later date.