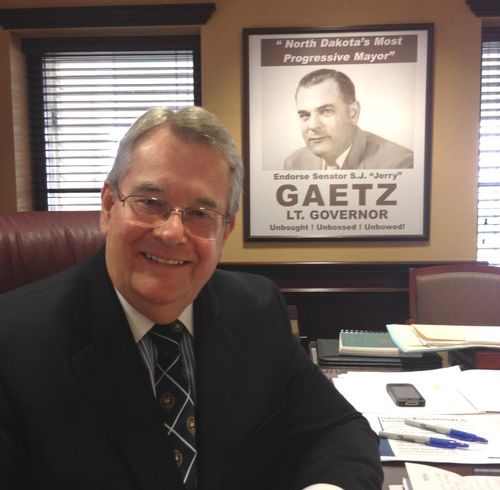 I've been operating the Tampa Bay Times' Instagram account all week, posting anything I saw interesting as the Legislature returned to Tallahassee for the first committee meetings of the 2014 session. I realized Wednesday night I didn't have any pictures of Senate President Don Gaetz, so I arranged to pay him a visit.

As luck would have it, Gaetz wasn't doing anything "interesting" when I stopped in this afternoon. The office was quiet and he was simply sitting at his desk working on upcoming speeches. So I spent a few minutes talking to him and trying to decide what to shoot.

I noticed a large poster on the wall. A guy named S.J. "Jerry" Gaetz was running for lieutenant governor in North Dakota. The poster was positioned in a way that Jerry would always be watching over Don as he worked at his desk.

"Is that your father?" I asked. Yes, Gaetz replied. "Did he win the election?" No.

The story that unfolded from there was sad and touching. We wrote about it in this 2008 profile of Gaetz, but it's worth telling again.

In North Dakota, the governor and lieutenant governor campaign separately. Jerry Gaetz was challenging the Republican incumbent 2nd-in-command for the party's nomination.

Representing the tiny town of Rugby -- current population 3,000 -- he called himself "North Dakota's most progressive mayor."

April 9, 1964, was the day of the GOP nominating convention. The candidates were making their final pitch. Don Gaetz, age 16 at the time, played hooky from school just so he could watch his father's big speech on TV.

The cameras were still rolling as Jerry Gaetz descended from stage to the crowd's applause. He was shaking hands when he collapsed.

Jerry Gaetz died right there on the convention hall floor. Don Gaetz saw it all.

Fast forward about forty-five years. Don Gaetz has followed his dad's footsteps into politics and is slated to become Senate president, one of the three most powerful positions in state government.

One of Jerry Gaetz's buddies died, and family members are purging old belongings. They come across a few of the old lieutenant governor campaign posters. The signs are perfectly preserved, except for a couple of crease lines showing where they had been folded up and stashed away.

Today, one of the posters is in the Fort Walton Beach law office of the grandson Jerry never met: Rep. Matt Gaetz. Don Gaetz framed another, the one that now hands right beside his desk.

Jerry Gaetz's campaign slogan is printed at the bottom of the poster. Three strong words that Don Gaetz said he has tried to live up to.