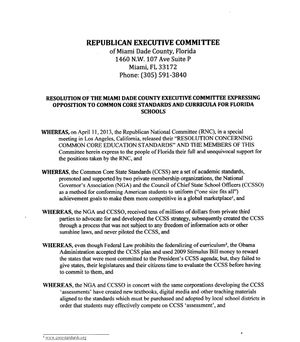 The two-page resolution, part of a grassroots conservative revolt sweeping Florida and the nation, was partly a stand against President Obama as well as former Republican Gov. Jeb Bush, who helped build the Miami-Dade Republican Party and chaired it in 1984.

Bush, the “education governor,” has recently been a leading voice advocating for Common Core, a series of standards that are new national benchmarks outlining what students should know at each grade level in each topic.

But in today’s world of conservative Republican politics, the distinction is blurred between Common Core standards and the curriculum to achieve those standards. For many, there is too much Obama and too much big government involved.

And, according to the resolution approved Tuesday night by the Miami GOP, there’s lots of money to be made by those companies making Common Core-aligned curricula, software and tests. Republican Frank de Varona said Common Core had bad standards, wasn’t constitutional and could allow private companies to engage in “intrusive data mining” of children.

“There are sensors being contemplated to put them on children at public schools,” he said. “Sensors, cameras, looking at your face...  a bracelet to measure your blood flow. It sounds like 1984 George Orwell kind of stuff.”

Activist Pam Evans, who helped propose the resolution (Download Resolution), appealed to Republicans to vote their conscience and buck their party leaders if need be.

“Is party more important than the education of the children of the state of Florida?” she asked. “Is loyalty to its lead promoters – Jeb Bush and the rest of the Republican leadership -- so cemented that we will be whipped into one mindset and put party over principal?”

Evans took more issue with the curricula associated with Common Core than the standards and noted, for instance, that children would be exposed to graphic sexuality by reading Toni Morrison’s book, The Bluest Eye, which is on some reading lists.

Only one person, Republican Max Levine, spoke up in favor of Common Core – and voted against the resolution.

“This is not, essentially, a federal endeavor. We know that 40 states voluntarily accepted this, including some led by some very conservative governors,” he said. “Yes. There’s federal funding tied. Yes, there are liberals involved. Welcome to public education, folks. The standards themselves are excellent…They encourage skills, they encourage critical thinking. They encourage analysis both in math and reading.”

Republican Juanky Robaina tried to steer a middle course and suggested the party members propose an alternative in addition to passing a resolution. He got little support.

Lost in the discussion was the subtle distinction that, as a series of standards, Common Core is not supposed to be a curriculum system dictated by the federal government.

There are not pre-set reading lists, or lesson plans for teachers.

However, companies sell products that tailor the curriculum to Common Core’s standards.

So Common Core requires a second-grade student to ask and answer questions such as who, what, where, when and why, and demonstrate understanding of key details in a text. But states and/or local school boards are supposed to select the curriculum that would actually list the texts those students read from.

The standards have been approved in 45 states and in the District of Columbia. They went into effect across all grade levels in Florida at the start of the current school year.

While led by tea partiers and libertarians, the opposition to Common Core isn’t just on the right. Some liberal groups are opposing the standards, too, albeit for different reasons. They are concerned the new standards and accompanying tests will stifle creativity in the classroom.

Still, state education officials have held firm on their commitment to keep the standards in place. On Tuesday, the state education board reaffirmed its support of the Common Core. And Bush's Foundation for Florida's Future held a media call with state Rep. Erik Fresen, R-Miami, and Florida College System Chairman Joe Pickens to promote the standards.

Meantime, though, Bush's political heir, Sen. Marco Rubio, broke with him over Common Core by criticizing it. Both men are the subject of speculation for a 2016 White House bid, though Rubio is more likely to run than Bush.

One voice has been noticeably absent from the conversation as of late.

At Tuesday's state Board of Education meeting, board member Kathleen Shahanan (a Bush loyalist and former staff chief) referenced rumors that Scott would weigh in on the Common Core controversy via executive order. Chairman Gary Chartrand said he "suspected" to hear from the governor soon, but did not elaborate.

Scott spokeswoman Jackie Schutz said an executive order isn't out of the question.

"The discussion and ideas generated at the summit will guide our future decisions and steps we will take through either legislative proposals, action by the State Board of Education or executive action to ensure Florida students are prepared for college or careers,” she wrote in a statement.