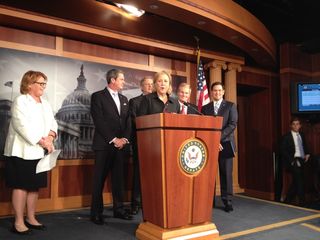 A bipartisan group of senators, including Florida’s Bill Nelson and Marco Rubio, said this morning they are seeking a solution that would prevent steep flood insurance rate hikes for homeowners.

But the lawmakers said they do not have a plan and even if they did, the government shutdown complicates things.

“There simply has to be relief and we will pass the relief,” said Nelson, a Democrat. “Now the question is finding the legislative vehicle and opportunity to do that given all of the stuff that is going on in the shutdown of the government.

The senators spoke on the same day the rates hikes are to go into effect. In Florida, 268,000 policy holders could face steep increases.

“This is about people. This is not just about some government program," said Rubio. "This is about people that are struggling that it is.” The Republican said he hoped the effort would lead to reforms “that in the long term make this program sustainable and available.”

But despite a bipartisan showing, the senators conceded they do not have a concrete plan. There are several different ones in circulation, including in the House.

“There are a lot of moving parts to this,” said Sen. Mary Landrieu, D-La., who has been sounding alarms about the legislation -- the Biggert-Waters Flood Insurance Reform Act - which was tucked into a massive transportation bill last year. It phases out federal subsidies on older properties in flood zones.

The lawmakers want at least a one-year delay so an affordability study can be completed by FEMA. The lawmakers say they would use that study to seek longer term relief. They need to bridge their own differences, including whether second homes and new construction should be covered by any relief effort, which would be retroactive.

"This is a huge issue for people not just in Florida or Louisiana and in the area that was hit by Hurricane Sandy," Heitkamp said. "We absolutely have to fix this problem. You might suggest why are we standing here and we don't a have a pitch or a proposal? We want to make sure that the message is sent to those folks who are seeing these large increases, that we are working very hard to reform the system, to get them relief and to not panic, not despair that this will be the reality of their homeownership."