Senate urged to retain existing gambling as it considers expansion 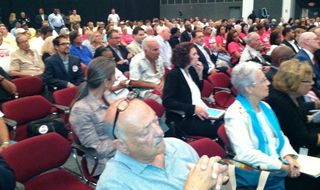 Florida legislators came to the heart of the state’s gambling country in Coconut Creek on Wednesday and heard from a packed house of well-organized — and tame — speakers who urged lawmakers to protect the incumbent industries as they consider expanding gambling in Florida.

“I am not a fan of destination resorts,’’ said Joy Cooper, mayor of Hallandale Beach, one of about 600 people who attended the three-hour hearing on Wednesday. “Our pari-mutuels have already invested time, effort and supported local businesses and paid local taxes.’’

The Senate Gaming Committee heard public testimony at Broward College’s north campus as it prepares legislation to rewrite the state’s gambling laws and again consider whether to allow for the arrival of so-called destination resort casinos in Miami Dade and Broward.

“Any attempt to expand new casinos in our area should encourage and incentivize the participants who have a track record,’’ said Brian Johnson of Fort Lauderdale. “If that sounds like a shameless plug, well, it is.”

It was the first of four hearings as the Senate takes the lead on an ambitious rewrite of the gambling laws. But Sen. Garrett Richter, R-Naples, chairman of the committee, said that while he is leaning towards the creation of a gaming commission, he is not prepared to say if it will include expanded gambling. Instead, he said, his focus is to eliminate inconsistencies in the law and “replace the current makeshift structure with a comprehensive statewide approach to gaming policy."

That threatens Florida’s incumbent pari-mutuel industries, which have lobbied legislators for decades to carve out the state’s current tangled regulatory scheme. It also equates to an opening for the powerful mega casinos, which have already identified locations in Miami Dade and Broward to locate a resort casino.

The hearing comes on the heels of a consultant’s report commissioned by the state House and Senate that slapped the Legislature and the state for being asleep at the switch when it comes to regulating gambling in Florida.

“The lack of a defining gaming policy has not limited the growth of gaming,’’ said Michael Pollock, chairman of Spectrum Gaming, which prepared the report, at a House meeting earlier this month. “The question is, will the legislature guide the future of gaming or be guided by it.”

The hearing in Coconut Creek was well scripted by the interest groups, with signs proclaiming “No Casinos” and “Destinations Now!” lining the entryway. The Florida Horsemen's Benevolent and Protective Association brought a retired thoroughbred horse named "PocoChico", mounted by jockey Isidro Perez, to the event so that the horsemen get their spotlight.

Richter divided the speakers into subject areas, from economic impact to social impacts and adult arcades. Each speaker was given a two-minute limit.

Ken McAvoy, senior vice president of Reed Exhibitions of Norwalk, Conn., came prepared to testify about the impact of operating destination resort casinos in South Florida on Orlando’s convention trade. But he ran out of time.

“The impact it’s going to have on Orlando is nil. You’re talking about new business, not cannibalizing business,” McAvoy replied, noting that South Florida will draw international visitors who spend more than American tourists.

The panel heard from animal advocates about how they want to see lawmakers allow dog track owners to operate slot machines and card rooms without dog racing. They heard from Palm Beach County business leaders asking to bring slot machines to the dog track there. They heard from horse trainers and breeders urging them to preserve and strengthen the state’s thoroughbred and quarter horse racing industry. And they heard from therapists and compulsive gamblers about the need to restore funds for treatment.

“All I wanted to do is go to that casino,’’ said Molly Simpson of Boca Raton as she spoke about her 17-year gambling addiction. “I never cared about family… It’s an insidious disease.”

Uberto Mondolfi, a psychotherapist from Miami Beach, told the committee that he works with addicted gamblers in Florida who are trapped by a system that offers no help for treatment.

“We need programs for early detection for those at risk,’’ he said. “Sadly, compulsive gamblers when they get to my office, they’re broke. …They come to me and they have no way of paying for treatment.”

Michael Wolf, a Fort Lauderdale lawyer for the adult arcade industry, urged the Legislature to revisit its ban on Internet Cafes which “closed down legitimate amusement arcades for no good reason.”

Steve DeGrave, an arcade owner from Key West, also chastised lawmakers. “You put me out of business,’’ he said. “I don’t pay my rent. I don’t pay my taxes. I don’t have any income.”

The most vocal organized effort, however, came from the animal rights supporters who urged the committee to pass a so-called decoupling bill that allows dog tracks to stop racing dogs but continue to operate other forms of gaming.

“Being housed in a small cage for 20-23 hours a day is a life that no one should have to endure,’’ said Michele Lazarow, a Hallandale Beach city commissioner. “Do you allow your dog to be treated that way?...It seems that forcing a business to race is not practical. It’s time to move away from this archaic thinking into the 21st Century.”

The next hearing will be Oct. 30 in Lakeland with hearings in Jacksonville and Pensacola to follow.