The speeches from Adam Hollingsworth were a sports-laden call to put points on the board.

As the newly tapped chief of staff for Florida Gov. Rick Scott, Hollingsworth was deeply troubled by his new boss' persistently bad poll numbers in the summer of 2012. In two years' time, Scott would be up for re-election. And the polls indicated the governor would lose.

"If it's halftime in a football game and we're in the locker room, do you think we'd be winning or not?"  Hollingsworth asked rhetorically, according to two staffers who heard the same speech at two separate meetings.

"If I was the coach and we had these numbers, I wouldn't be patting people on the back," Hollingsworth reportedly said. "I'd be throwing my chair against the damn wall."

And since he began leading Team Scott, the governor's approval rating has worsened, according to numerous polls. Most recently, this week, liberal-leaning Public Policy Polling's survey indicated that Scott's approval ratings in the Hollingsworth era have gone from an index of -8 to -22 (i.e., from 41% approve/49% disapprove to 33% approve/53% disapprove; see graph below).

There are criticisms of PPP's methodology, mind you, as well as the fact that it typically works for Democrats and liberals. But its numbers have consistently matched other surveys, including Quinnipiac University, which will likely be polling Florida soon.

Regardless of the poll, Scott has consistently trailed former Gov. Charlie Crist by double digits in hypothetical matchups. And Scott is pretty much tied with the only major announced Democratic candidate, former state Sen. Nan Rich, little known and struggling to fundraise.

Not all of this can be blamed on a chief of staff. Scott is in charge. He barely won office in the reddest of Republican years, and his poll numbers have always been poor. Also, the trendline below indicates that Hollingsworth took over as Scott reached a peak in his relative popularity. The state of the 2012 presidential campaign and the economy certainly have influences on the numbers as well.

But Hollingsworth has major influence over Scott's policies, which help drive his poll numbers. And Hollingsworth is obviously watching the polls.

Scott (since his time at Columbia/HCA and beyond) has a reputation as a delegator, he puts people in positions of authority and then generally follows their advice. Some who have known him over the years say there's a drawback to that: He's most influenced by the last guy in the room advising him.

Hollingsworth apparently knows that, and has made sure to be the last guy in the room. It's a similar tactic employed by his predecessor, Steve MacNamara, whose time was marred by controversy over insider deals. MacNamara was Scott's biggest failure, and Hollingsworth probably won't match that sad superlative. Hollingsworth has a reputation of being far more honest and decent than MacNamara.

But, word is, he has increasingly charted a course that has tried to minimize Scott's top political adviser, Tony Fabrizio, who never talks about what's happening in Team Scott's huddle and always says all is well.

Fabrizio, however, did intriguingly note in a public speech in Miami last month that he was simply a pollster and message-expert, not the person setting the agenda for Scott. Fabrizio was once much more than that. And, perhaps, once the campaign is under way (Scott hasn't officially announced yet), Fabrizio's role will become more noticeable and the tongue-wagging about a Hollingsworth-led ice-out will die out.

But as of now, under Hollingsworth, Scott's agenda has become less predictable and his message more muddled in the past year.

Forsaking his conservative base, Scott tepidly called for the expansion of Medicaid under Obamacare, outraging his tea party base. Scott said little as the House crushed the idea. Tea partiers were still bugged.

Late last month, Scott started to distance himself from the Common Core educational standards championed by former GOP Gov. Jeb Bush. Scott now won't even say if he supports Common Core. In that case, the far-right cheered. But some Bush supporters are miffed and concerned.

"It's getting tougher and tougher to tell where Scott stands," said one top legislative Republican. "It looks like he's flailing. And sometimes it seems as if Adam acts like he's the governor."

Earlier this week, word surfaced that Hollingsworth also approved an embarrassing $25,000-per-donor gator hunt fundraiser for Scott, which was scuttled amid blowback.

Hollingsworth isn't commenting. And a governor's office spokesperson didn't deny the reports in the East Orlando Post blog, saying simply: "You will need to get with the GOP on fundraisers, etc." (Note: this was a Scott fundraiser, not a political-party fundraiser).

So here's what one knowledgeable Republican source said: "Adam knew about it. This idea wasn't new, but people before Adam quashed it because it's just a weird, bad idea... I didn't understand it. I'd rather have a nice dinner and hand the governor a check instead of going out in some swamp shooting reptiles."

Another Republican Capitol insider said the Executive Office of the Governor, under Hollingsworth's immediate control, was also informed by Attorney General Pam Bondi's office last month about a fundraiser of hers that conflicted with a scheduled execution. So the execution was moved, embarrassing Bondi and forcing Scott to say what he knew (he said he knew nothing). It's clear the major blame falls on Bond (who apologized) but Hollingsworth apparently could have spoken up to stop the blunder, but nothing was done.

Another reversal of a different sort has Republicans scratching their heads: Scott's decision to refuse to fund a Sarasota rowing center, only to turn around and then back it so publicly that he appeared at an event at Regatta Island touting the use of the tax money. Scott described it as a job-creator. But the image of a rich guy giving tax money to help a rich-guy's sport elicited groans from GOP consultants.

"What's the messaging there?" one asked.

Then there was the awkward moment after Hollingsworth looked down on associating with lobbyists, the "Tallahassee apparatchik," only to attend a lobbyist-heavy birthday party.

Now a new insider controversy looms concerning Scott's long-vacant lieutenant governor spot. Hollingsworth, who helped push out former Lt. Gov. Jennifer Carol, is now pushing for his longtime friend, Jacksonville Sen. John Thrasher, to become lieutenant governor. For a guy who speaks ill of lobbyists and the Tallahassee power structure, the choice of Thrasher (a former top notch lobbyist after he was House Speaker) is an interesting move.

Political operative Roger Stone, a Republican-turned-independent political consultant, has bashed Hollingsworth's Thrasher-advocacy on Twitter. Stone's criticism stands out because he's a longtime friend of Fabrizio's. However, the two haven't been close for some time when Stone began criticizing the governor and making noise about running for the post himself.

Stone doesn't want to comment, an out-of-character posture. So we're left with the mobs of Republicans in Tallahassee speaking without attribution about Coach Hollingsworth. The governor's paid defenders  will question why the critics aren't bold enough to speak on the record. Here's why: it'll cost them their jobs and livelihoods.

But these are all Republicans and all people who dread the idea of Crist becoming governor and Scott losing. There are many of them. And they know their business.

What we do have that's clear is what's on the record: Poll numbers. Lots of them. Bad ones, and consistently so.

The fourth quarter is coming up. Scott is down. And many Republicans are concerned that Hollingsworth just can't handle the two-minute offense. 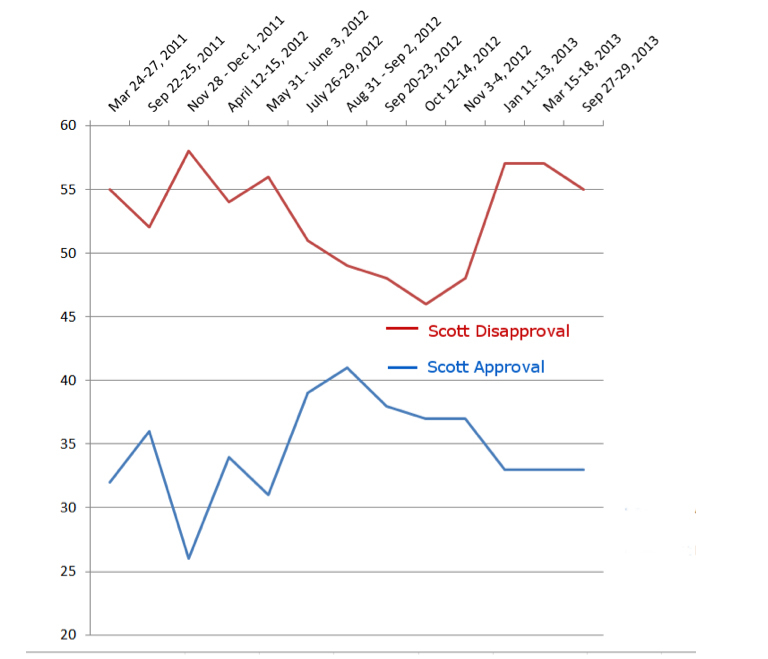