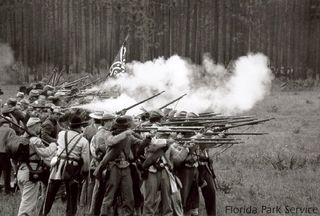 By MARGIE MENZEL
THE NEWS SERVICE OF FLORIDA

The state parks system is on the hot seat and a House leader is calling for action over a proposed monument to Union soldiers at the site of the biggest Civil War battle fought in Florida.

The bid to add a Union monument to the Olustee Battlefield Historic State Park near Lake City has drawn a furious response, with about 100 people attending a Monday night public hearing at the Columbia County School District Auditorium. Representatives of the Florida Department of Environmental Protection, which oversees the state parks, moderated the hearing.

Passions ran high, at one point erupting in a spontaneous chorus of "Dixie" led by a black man, H.K. Edgerton, who called Union soldiers rapists and wielded his large Confederate flag like a conductor's baton as the audience sang.

Speakers blasted the proposal as disturbing hallowed ground in a rural community where most families stay for generations.

"Putting a Union monument at Olustee would be like placing a memorial to Jane Fonda at the entrance to the Vietnam memorial," said Leon Duke, a wounded veteran.


"Men died there. Let their spirits rest in peace," said Nansea Marham Miller, who is descended from a Confederate soldier who died at Olustee. "Let my grandfather rest in peace."

The park is in the Osceola National Forest, 50 miles west of Jacksonville and 15 miles east of Lake City. It was the site of a four-hour battle on Feb. 20, 1864, in which Union forces were routed by Confederate troops.

In 1909, the Florida Legislature acquired three acres there to build a memorial. In 1912, Olustee became the first state park in Florida, and each February, a re-enactment of the battle is staged there. There was heavy debate during Monday's meeting about whether the already-existing memorial is a Confederate memorial or is broader in scope.

Last February, DEP received a proposal from the Sons of Union Veterans of the Civil War to add a memorial specifically for Union officers and soldiers. The agency vetted the proposal and scheduled Monday's public hearing to discuss possible locations at the park for the memorial.

But the discussion never got that far.

Many of the speakers identified themselves as descendants of soldiers who lost their lives at the Battle of Olustee. Many said they participated regularly in Civil War re-enactments. Many began their speeches by stating how many generations of their families had lived in Florida.

Jeff Grzelak of Orlando, a Civil War historian whose business card depicts him in a Union uniform, said a Union marker had been placed in the cemetery at Olustee 23 years before.

Mike Farrell, a member of the Sons of Union Veterans of the Civil War, is also descended from a soldier who died at Olustee. Farrell said he's been a historical exhibitor at the park for years and proposed the new memorial as a result.

"I always have the visiting public approach me and ask me where the Union monument is on the battlefield, and I often tell them, 'There isn't any.' I'm not talking about what Jeff was talking about, which was a cemetery marker to the dead. What I'm talking about is a battlefield monument," Farrell said.

That prompted disagreement from audience members, and moderator Lew Scruggs, DEP's chief of park planning, called for them to let Farrell finish.

Jamie Likins, president general of the United Daughters of the Confederacy and a fifth-generation Floridian, noted that the idea for the monument had come from a member of her group whose husband had fought at Olustee.

"The Olustee monument is to the Battle of Olustee and honors all, both, Confederate and Union soldiers," Likins said.

Agreed Susan McKinney, also a member of group: "Either abide by the agreement or give the land back!"

House Judiciary Chairman Dennis Baxley, R-Ocala, said he was concerned that no elected body had reviewed the proposal.

"There is a sacred trust that's being violated when you go in and change an historic site from the way it was commemorated by those who established (it)," Baxley said.

He suggested getting the matter "off the table" by means of a bill that he would sponsor. "I can do a very simple proposal to the Legislature that we protect all monument sites," Baxley said to cheers and applause.

But Rep. Elizabeth Porter, a Lake City Republican, said she had spoken with DEP Secretary Herschel Vinyard and that the public hearing --- by getting local reaction onto the record --- would help resolve the dispute.

She also disagreed with Baxley's suggestion of a legislative remedy.

"If I agreed with that, I would have asked for it to go through the Legislature," Porter said. "I wouldn't have asked Secretary Vinyard, 'Could we have a local meeting with local people and stakeholders who have a real say in what goes on here?' "

"And let's face it," she continued, "Does anyone here think the Legislature always has the right answer? I'm in it, and I don't."

DEP officials also came in for some criticism for having allowed the proposal to come as a surprise to the locals, but Porter said they were just doing their jobs.

David McAllister of Tampa, however, wasn't reassured. He said his great-grandfather had donated four acres in Wakulla County to commemorate the Battle of Natural Bridge, and he was worried that that site would also be tampered with.

"Is Natural Bridge next?" he demanded.

Other suggestions included incorporating the Sons of Union Veterans of the Civil War as donors and collaborators in a battlefield museum, with an exhibit of their own.

The hearing lasted nearly three hours, and after everyone had spoken, DEP's Scruggs said he would take all their comments back to his superiors.

"We have not reached any sort of decision," he told the audience. "I don't believe there's a rush to judgment here."