« Jobs in Florida: The Rick Scott record (preview) | Main | Winston will not face rape charges, family of accuser thanks prosecutor »

Gallup, the nation's premier polling outfit, has more grim news for President Obama: Hispanics are turning away from him in greater amounts than any other subgroup.

"Hispanics' approval ratings of Obama have shown the most variation of any group's ratings throughout his presidency," Gallup explains in an analysis. "That means their views of him are less firmly anchored than those of other groups, which may help explain why their opinions of the president soured more than any other group's in recent months. Despite the significant decline in their approval ratings over the past 12 months, a majority of Hispanics, 52%, still approve of the job Obama is doing."

Unmentioned by Gallup: Hispanic voters are increasingly registering as independents (at least in Florida, where Hispanics are the fastest-growing segment of the electorate and account for about 14 percent of the rolls). And independent support for Obama has tumbled.

Hispanics are also among the least-likely to be insured, and the president made sure to tout the advantages of the Affordable Care Act in 2012 Spanish-language TV ads.

The rollout of Obamacare, though, has been a public-relations nightmare that, coupled with the president's misleading statements about people keeping their health insurance, has dragged down his poll numbers. So there's a chance that some of the loss of this Hispanic support could be due to a certain amount of disillusionment.

Obama also campaigned on immigration reform. But though it passed the Democratic-led Senate, the issue has stalled in the GOP-led House.

After weathering debt-and-budget fights, Obama has more recently made immigration reform a focus.

Meanwhile, immigration-reform advocates are calling on the president to halt the record daily deportations of illegal immigrants that have occurred during his term.

"5 years and 2 million deportations after his campaign promises is too long #Obama can DO more! #not1more," advocate Kathy Bird-Caicedo ‏just tweeted. She pointed out that some know Obama as "The Deporter in Chief."

Whether Hispanic voters are upset with Obama over immigration (or any other issue) and whether they'll give him credit for trying to tackle the issue is anyone's guess.

By and large, Hispanic voters are likely less favorably inclined to the party that has most-opposed the Affordable Care Act and immigration reform, the GOP. But the flagging support for the president raises the question about whether Democrats will have to spend more time winning back Hispanics heading into the 2014 elections.

Here's the Gallup post. And here's a JPEG of all the subgroups 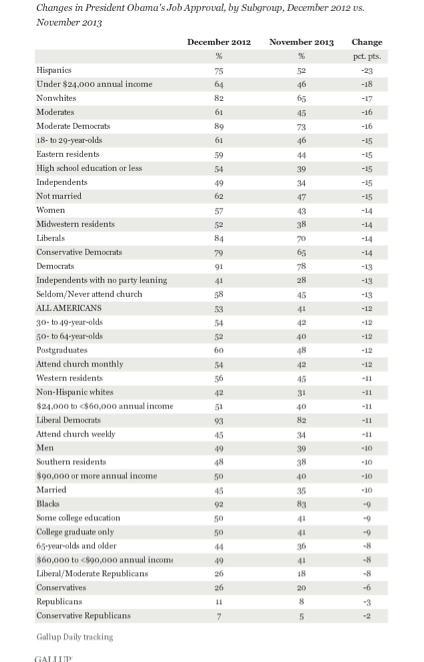