« Obama-Castro redux: Image of a handshake, but a speech with a backhanded slap | Main | 7 steps, 7 years, still a lot more jobs to go: PolitiFact Florida on Rick Scott's jobs record » 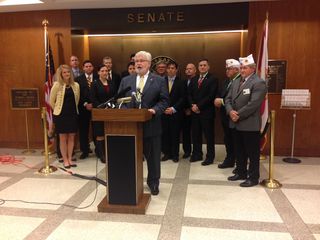 A proposal to allow veterans from anywhere to pay in-state tuition if they attend a Florida college or university has a new name on it: that of U.S. Rep. C.W. Bill Young.

The Senate Education Committee voted unanimously today to rename Senate Bill 84 in honor of  Young, who died in October after nearly 53 years of service in Washington and Tallahassee.

"I don't know anyone who has ever served in a public office in Florida who has cared more about our active duty military and our veterans than Congressman Young," said Sen. Jack Latvala, R-Clearwater, who sponsored SB 84.

Senate Bill 84 is moving fast. It has already passed two of four assigned committees even before the beginning of session, including today’s vote.

The House companion, HB 35, has been referred to three committees and hasn’t been put on the agenda of any of them yet. But the proposal is expected to have an easy time there, too, since the House approved a similar bill last year.

The “Congressman C. W. Bill Young Veteran Tuition Waiver Act" would negate the out-of-state fees for all veterans who attend classes in person as long as they reside in Florida, even if they don't meet the normal requirements for in-state tuition. That sets it apart from similar but more controversial proposals to grant in-state residency status to children of illegal immigrants (HB 205 and SB 428).

The House bill that is also expected to be amended to honor Young is sponsored by Reps. Heather Fitzenhagen, R-Fort Meyers, and Kathleen Peters, R-South Pasadena, who is running in the special election for Young’s seat.

Peters decided not to attend today's press conference announcing the Senate bill had passed its second committee and been renamed after Young because the sponsors didn't want to politicize the event, Latvala said. But he also said he never hesitated when Sen. John Legg, the Trinity Republican who chairs the Education Committee, called him this weekend with the idea of honoring Young.

"I wasn't going to pass up an opportunity just because there's a race going on," Latvala said.