« Gallup: Obama hemorrhages Hispanic support, drops 23 points in a year | Main | From Jeb to Crist to Obama, everyone thinks Craig Fugate does a heckuva job »

Winston will not face rape charges, family of accuser thanks prosecutor 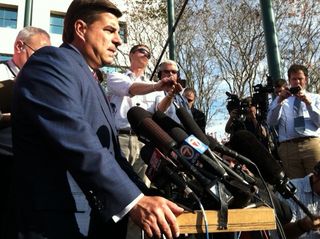 State Attorney Willie Meggs closed the case against Florida State quarterback Jameis Winston on Thursday, saying that the flaws in the accuser's story made it virtually impossible to bring a conviction.

Meggs said the timing of the decision to not bring charges against the 19-year-old Heisman Trophy candidate had nothing to do with the Heisman voting, which ends Monday, or the ACC conference championship game to take place on Saturday.

He said he did not believe he had the evidence to show that a sexual assualt took place as the female Florida State University student alleged after the sexual encounter on Dec. 7, 2012.

"We came to a decision that it was not a case we could bring forward because we would not have the burden of proof, the probable cause and the reasonable likelihood of a conviction,” Meggs said. "We did not feel we had sufficient evidence to prove that it was not consensual.” He said he will make public the documents relating to his closed investigation by midday on Friday.

A written statement from the alleged victim released by police Thursday indicates that she told police that she was in a local college bar with her friend drinking shots and "next thing I know I'm in the back of a taxi with a random guy I have never met."

She said there was another person in the taxi and they went to an apartment. "I kept telling him to stop but he took all my clothes off,'' the . He started having sex with me and then his roommate came in and told him to stop. He moved us to the bathroom 'because the door locked' and I'm not 100 % sure how everything in there happened."

Winston's attorney, Tim Jansen, has repeatedly said the the sex was consensual and affidavits from witnesses in Winston's room will confirm that.

"Her story just does not add up,'' he said at a press conference Thursday. "We're completely satisfied this is done. We can move forward.''

A trigger in Megg's decision appears to be the appearance of DNA evidence from a second male, whom the woman did not identify. Lab results released by police on Thursday indicate "presence of a mixture" of DNA from two men on the woman's pink shorts.

Meggs said the evidence confirmed that Winston's DNA matched a sample found in the woman's underwear while the DNA from both Winston and the woman's boyfriend was found on the shorts.

A friend of the accuser, Bria Henry, told the Herald/Times that the accuser's boyfriend is Jamal Roberts, a redshirt freshman with the Kent State Golden Flashes, who also attended Zephryhills High School with the accuser and Henry.

Henry said she called her friend on the phone and "she was boo-hoo crying,'' she recalled. "She said she was raped. I said, 'calm down."

"She did say she didn't know him. She recalled his features -- he was buff and had a little 'fro,'' Henry said.

Against the accuser's wishes, Henry helped to contact the girl's mother, who arrived later that morning.

Henry said her friend agreed to take the rape test because she was afraid of STDs but while "she did feel violated,'' she was not initially interested in pursuing charges.

"I think she was more convinced by her parents,'' she said. "She just wanted it to be over with. She didn't want it to esecalate."

Henry said she was not aware that Roberts had been in Tallahassee in December visiting her friend, but indicated they all had been home in Dade City over the Thanksgiving break two weeks prior.

"She did say she didn't know him. She recalled his features -- he was buff and had a little fro,'' Henry said. She said Roberts had been home in Dade City, along with the accuser, over the Thanksgiving break two weeks prior.

Meggs said the boyfriend did not cooperate with his office and they relied on a state attorney in Ohio to help them obtain the DNA from him.

In a statement, Winston thanked Meggs "for examining all the facts."

"It's been difficult to stay silent thorugh this process, but I never lost faith in the truth and in who I am," he said, adding that he looks forward to "continuing my education at Florida State and I'm excited I can now get back ot helping our team achieve its goals."

The Tallahassee Police Department turned the case over to Meggs on Nov. 12 after several media inquiries. Although the accuser identified Winston as her alleged attacker in January, the police failed to obtain any DNA evidence until Meggs got involved.

Patricia Carroll, the attorney for the woman, whose name has not been released according to Florida's rape shield law, also thanked Meggs for "attempting to conduct a proper investigation after an inordinate delay by the Tallahassee Police Department."

Carroll continued to place blame on the police department. She said her client "had the courage to immediately report her rape to the police and she relied upon them to seek justice.''

She warned, however, that "the victim has grave concerns that her experience, as it unfolded in the public eye and through social media, will discourage other victims of rape from coming forward and reporting."

Meggs emphasized that he did not need the accuser's cooperation to go forward with an assault charge  "if we have a case we're going to pursue it" -- but in this case there wasn't enough evidence for him to succeed.

Among the problems, he said, were memory lapses but she was not intoxicated and there was no evidence of drugs in her system. "Her recall of the events of that night have been moving around a good bit,'' he said.

Jansen suggested that Winston's family is considering filing civil charges, possibly against the accuser and the media.

Photo: Winston's attorney Tim Jansen speaks to reporters outside the Tallahassee Courthouse after prosecutors announced they will not bring rape charges against his client.