Whenever a statewide political race is decided by a percentage point or so, it can be argued that every little thing played a major role in a campaign's win or loss.

Yes, it was a tight race. Money played a big part. Money doesn't buy an election. But it puts a downpayment on it. And Scott not only outmuscled Crist in media message, the governor vastly improved his numbers in North Florida.

In the three North Florida media markets Scott won, he improved his 2010 margin by almost 90,000 and and in the two he lost, Scott also improved his margin by nearly 20,000.

Crist improved on Sink's margins in the two Southeast Florida media markets by 96,000. But, consider how Scott fared in North Florida, it wasn't enough.

Here's our first day-after story on the race and the graphic that went with it, breaking down the media markets. 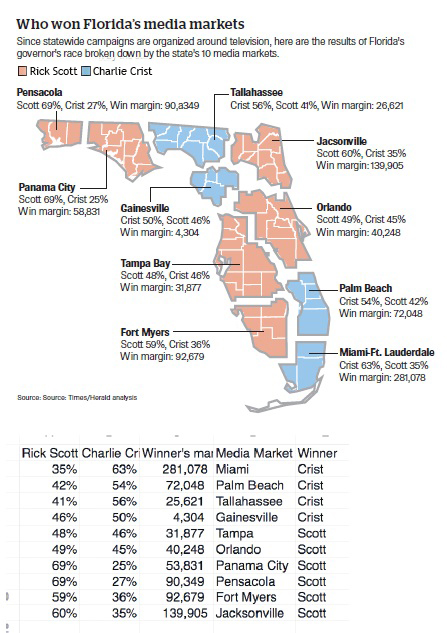 Which side spent more on the midterms?

Rare was the recent commercial break not dominated by negative TV ads this cycle, a nasty byproduct of record piles of money thrown at competitive races across the country.

The money poured in from candidates, parties, super PACs and "dark money" groups that don’t have to report their donors, and also individual donors like you (though your influence is waning, sorry).

On the eve of Election Day, MSNBC Morning Joe co-host Joe Scarborough and guest economist Jeffrey Sachs argued about whether the left or the right had more dough in what Sachs called the "billionaire’s election."

Most of the money will be well-disguised, with huge sums coming from private oil and gas companies, Sachs said, singling out millions of dollars in contributions from billionaire brothers Charles and David Koch. Scarborough was not having this argument.

"Jeff, you just can't say that," Scarborough said. "You can look at the numbers, and the left and the right are both equal. It’s like the arms race between the Soviets and the Americans. It’s equal. You can say ‘big oil’ all you want to, that’s just not factually accurate."

Sachs replied that the Koch brothers alone have probably put $300 million into the election. Scarborough said, "You always talk about oil and gas when in fact there are environmentalists on the left that are putting in millions and millions," a reference to liberal super PAC donor Tom Steyer.

"Add up all the money, right now, it’s about equal on both sides," Scarborough said.

Turn to Katie Sanders' fact-check from PunditFact to find out if Scarborough was correct.

When Schwartz won reelection Tuesday over lawyer Frank Bocanegra, she issued a statement saying voters had "gone past the days when any nondescript Hispanic could go on the ballot and defeat any Anglo sitting judge."

Campaign strategists have long believed that candidates with Spanish surnames have an advantage in Miami-Dade, particularly in judicial elections where campaigning is limited.

In a letter sent to her on Wednesday, the Cuban American Bar Association said "the statement is incompatible with your duties as a judge and with the dignity of judicial office."

Her "troubling" words suggest that "some or all of your Hispanic colleagues on the bench achieved their positions by virtue of a 'nondescript Hispanic name' and not because of their hard work, professionalism and other qualifications," CABA President Ricardo Martinez-Cid wrote.

The veteran judge's campaign was marked by another poor choice of words. Before the August primary, a Coconut Grove store clerk complained that the judge said "Go and f--- yourself" in a row over an opponent's campaign sign.

Bob Levy, the campaign manager who released the statement, declined to comment on CABA's letter.

"The judge herself is back on the bench doing what the people of Miami-Dade County re-elected her to do," he wrote in an e-mail.

And she is assigned to the courthouse in Hialeah -- one of the most overwhelmingly Hispanic cities in Miami-Dade.

After 'shellacking,' Democrats say they will 'retool'

Florida Democratic Party Chair Allison Tant stated the obvious: "We took a shellacking." But she said the party will pick up the pieces from Tuesday's drubbing and keep working to restore a semblance of a two-party system in Florida.

"We're going to retool and move forward," she said.

Tant said the "national headwind" was a big problem in Year Six of the Obama presidency, along with the Republicans' lopsided advantage in the product that dominated the race for governor: money to buy TV ads. From the Democratic leader's point of view, the election looks like this: Gov. Rick Scott had the advantages of incumbency, vastly more money and wrote his campaign $12.8 million worth of checks -- and still barely won, at last count, by slightly less than 66,000 votes.

"I'm mystified," Tant said, by another disappointing Democratic turnout in South Florida, where this time fewer Democrats showed up in Miami-Dade, despite what she called an "unprecedented" grass-roots vote-building effort for an off-year mid-term election.

"Clearly we have to do things better," Tant said. She vowed that Democrats will continue to hold Republicans accountable while speaking up for middle-class families in Florida on issues such as education, health care and the minimum wage.

South Florida’s 26th congressional district lived up to its label as a swing seat Tuesday, changing political party hands for the second time in two years.

Florida lawmakers redrew the boundaries of the state’s southernmost district in 2012 so that it’s almost evenly split among registered Democrats (35 percent), Republicans (33 percent) and independents (32 percent).

Granted, Garcia was tainted by campaign scandals. So was Rivera. But the back-to-back victories by opposing parties in the district suggest it could remain competitive for years to come.

On Wednesday, Curbelo said he’s not worried that the frequent turnover, depending on the composition of the electorate in a given election, could affect his future chances.

“If I work hard and do a good job for this district, and I represent the community with effectiveness, I think I’ll get another shot at it,” Curbelo said. “It is certainly too early to start thinking about the next election.”

NextGen Florida director: the fight against climate change in FL is just beginning

NextGen Florida spent $19.8 million in Florida between Aug. 7 and Oct. 22 this year with the influsion of cash coming from California billionaire and former hedge fund investor Tom Steyer. Their goals: to defeat Gov. Rick Scott,  raise awareness about climate change and bring young people to the polls. They failed on the first, succeeded on the second, and the report card on the third goal appears to be mixed.

To capture a veto-proof majority, the GOP needed to oust at least five Democratic incumbents.

Sprowls called it a "hard-fought victory."

Garcia, a freshman Democrat, was undone in part by scandals, much like the Republican he defeated two years ago.

Curbelo, a Miami-Dade County school board member, led from the moment the first election results were posted through the end. He won the 26th congressional district, which spans Westchester to Key West, with 52 percent of the vote to Garcia’s 48 percent.

“Tonight begins the work of giving the people of Florida’s 26th congressional district the honest and effective representation we need,” Curbelo said.

Democrat Maria Sachs held onto her seat in the Florida Senate Tuesday, surviving a bare-knuckle challenge from former Republican Sen. Ellyn Bogdanoff that cost the candidates a combined $1 million.

The race, a rematch of the 2012 election, was the closest watched contest in the Senate. The attack ads were attention grabbing, the stakes sky high.

If Sachs had lost, the GOP stood to grab a veto-proof majority in the upper chamber. What’s more, Republican Sen. Jack Latvala, of Clearwater, would have firmed up his chances of becoming Senate president in 2016.

The incumbent said she felt "humbled" by the voted of confidence. "It shows that money and negative personal attacks are not going to win people of this district," she said.

Rodriguez said his campaign was rooted in two things: "supporting the community and trying to do good work."

Diaz Leyva raised more than $430,000 for his bid to unseat Rodriguez. The incumbent had collected about $345,000 in campaign contributions.

A third closely watched contest — the battle for for House District 114 in Miami-Dade County — also went to the incumbent, Republican Rep. Erik Fresen.

Observers predicted a close finish in the swing district, which includes West Miami and parts of Coral Gables, Pinecrest and Palmetto Bay. But Fresen, a well-known lawmaker who was first elected to the seat in 2008, easily defeated Democrat Daisy Baez and independent Ross Hancock.

Fresen never doubted he would win overwhelmingly, he said.

"It’s a testament to the work that I've done and the record that I have,” said Fresen, who has chaired the House Education Budget Subcommittee. "I'm happy to be back representing District 114."

BONITA SPRINGS ---Bolstered by a $100 million campaign and a stronger economy, Gov. Rick Scott overcame his own political liabilities and a fierce challenge from Democrat Charlie Crist on Tuesday as he won a second term that solidified Republican control of the state.

Polls showed the race would be tight, and it was.

“It’s time to put all the division behind us and come together. Forget the partisanship,” Scott said in his victory speech.

“Florida is on a mission – and that is to keep growing.”