In a year with only a handful of competitive statehouse races, a battle in Miami-Dade County is quickly becoming the one to watch.

Democrats are fighting to ensure state Rep. José Javier Rodríguez keeps his seat in the Florida House. A Harvard-educated attorney, Rodríguez is a skilled debater who is considered a rising star in political circles.

Yet, the Republican Party sees House District 112 as one it can flip. Its nominee, attorney Daniel Diaz Leyva, is a rising star in his own right who has raised nearly $325,000 for his campaign and won the support of key GOP leaders including U.S. Sen. Marco Rubio, U.S. Rep. Ileana Ros-Lehtinen and former Gov. Jeb Bush.

Other factors will come into play, including how the electorate feels about the Obama administration and how many Democrats come out to support gubernatorial candidate Charlie Crist, pollster Fernand Amandi said.

"This will be a bellwether race," Amandi said.

In the long-running competition for leadership of the Senate in 2016, Republican Sen. Jack Latvala of Clearwater is outpacing rival Sen. Joe Negron of Stuart in one category: raising money.

Latvala's Florida Leadership Committee is approaching the $2 million mark, with nearly $1.9 million in contributions through Sept. 26. Negron's Treasure Coast Alliance raised $1.7 million through the same period. But since the legislative session ended May 2, Latvala has raked in $985,000, compared to $279,000 for Negron's committee.

"I had a good session and I got a lot of stuff done," said Latvala, who added that Negron enjoyed a built-in fund-raising advantage as chairman of the powerful Senate Appropriations Committee.

The surge of money allows Latvala to invest heavily in the campaign of former Sen. Ellyn Bogdanoff of Fort Lauderdale in her fight to unseat Democratic Sen. Maria Sachs, who beat Bogdanoff in 2012, and is the only competitive Senate race in the state. Latvala's PAC sent $325,000 to another committee, Floridians for Integrity in Government, that has bought TV ads highlighting ethics allegations against Sachs over her legal residence.

Negron said that since the session ended, he has focused more on helping Sen. Andy Gardiner, R-Orlando, raise money through the Republican Party of Florida to help Senate candidates across the state and focusing on his own re-election. Negron and Latvala are both expected to easily win new terms in November.

"My focus has been on helping Senator Gardiner and making sure the entire Republican caucus comes back," Negron said.

Latvala's committee got a $100,000 check last month from Pinellas entrepreneur Bill Edwards and received $130,000 from the public employee union AFSCME, the American Federation of State, County and Municipal Employees. Latvala is a rare Republican lawmaker with a pro-union record, and has opposed changes to the state pension system that AFSCME opposes.

A high-stakes legal battle about the constitutionality of the state's congressional districts should be fast-tracked to the Florida Supreme Court, a divided appeals court ruled Wednesday.

Under the ruling, the 1st District Court of Appeal would not take up a challenge to districts redrawn in August by the Legislature and to other decisions by a circuit judge. Instead, the case would go directly to the Supreme Court --- a relatively unusual move known as "certification" of the case to the higher court.

A panel of the appeals court, in a 2-1 decision, agreed on the certification issue with voting-rights groups that have waged a drawn-out legal battle about whether congressional district lines were drawn in 2012 and redrawn this year to favor Republicans. While the redrawn districts would not take effect until the 2016 elections, the majority of the appeals court pointed to the lengthy history of the case in deciding to pass it along to the Supreme Court.

"In this case, any doubts about the need for immediate review by the Supreme Court should be resolved in favor of certification,'' said the opinion, written by Judge Philip Padovano and joined by Judge Simone Marstiller.

In Orlando, they hosted a webinar on how to skip the state tests.

In Fort Myers, they convinced the local school board to eliminate all district-required exams.

In Miami, they created an anti-testing network of nearly 1,400 members.

Across Florida, parents are pushing back on standardized tests. Some say schoolchildren are taking too many exams. Others have concerns about the quality of the tests, and the way the results are being used.

"This is unlike anything we’ve ever seen before," said Suzette Lopez, who is spearheading the effort in South Florida. "It's really hit a critical mass."

The growing movement has caught the attention of state lawmakers.

Senate Education Committee Chairman John Legg recently acknowledged that students in Florida face "an avalanche of tests" — and said the Legislature is likely to get involved.

"We need to get our house in order," said Legg, a Pasco County Republican who runs a charter school. "Some of those tests are outdated or duplicating other tests. They need to be put out to pasture."

Posted by Kathleen McGrory at 11:09 AM in Education, Election 2014, Florida Legislature 2014 | Permalink | Comments

A judge on Wednesday dismissed one of two legal challenges to the state school voucher program.

The lawsuit, filed by the statewide teachers union, targeted a controversial law that both expanded the voucher program and created new scholarships for children with disabilities.

The union said the Florida Legislature had violated the state Constitution by rolling multiple policies into one law.

Leon County Circuit Court Judge Charles Francis dismissed the case on a technicality. He said the social studies teacher who was named as the plaintiff did not have standing to bring the lawsuit.

"We wish the judge had taken up the merits of the case, because it's clear that the legislature overstepped its authority in passing this legislation," she said.

Incoming Senate President Andy Gardiner, R-Orlando, said he was hopeful the union would "take this opportunity to re-evaluate their case and recognize the harm continuing this lawsuit will cause students."

FEA attorney Ron Meyer said he and union leaders was still determining whether to amend the complaint.

Florida's 67 election supervisors released a report Tuesday that calls on the Legislature to create a new system of online voter registration next year. But the report cautioned that the system should be implemented cautiously and after the next presidential election in 2016.

The report, released on National Voter Registration Day, was produced at the request of Sen. Andy Gardiner, the Orlando Republican who will be Senate president in November. The full report can be found here.

Arizona was the nation's first state to switch to paperless voter registration, back in 2002. A total of 20 states now allow people to register online, including Georgia, South Carolina and Louisiana and four more states are in the process of implementing online registration. Democrats in the Legislature (Sen. Jeff Clemens of Lake Worth and Rep. Alan Williams of Tallahassee) filed bills in the 2014 session to implement the change, but Republicans would only allow a brief workshop on the idea.

With his First Amendment challenge pending before the Florida Supreme Court, GOP political consultant Pat Bainter issued a rare statement calling out the court after oral arguments today in which he urged the court to keep secret his emails related to redistricting.

Bainter is now suggesting that the "institutional integrity of the court is at stake" in how they rule. 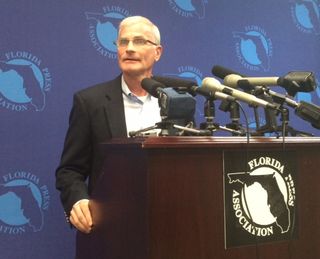 The ad, which has run about 4,000 times in Florida, features an unidentified man saying he was “swindled" by both Ponzi schemer Scott Rothstein and Democratic candidate for governor Charlie Crist.

The Miami Herald later idenfitied the man as Fort Lauderdale investor Dean Kretschmar — and found that he "never made that allegation [about Crist] in his successful lawsuit to recover millions of dollars in Rothstein-related losses."

Fasano, a longtime Republican and former state senator, called the ad "nothing but a lie."

Bob Martinez, who was a civics teacher long before he became the state's 40th governor, wants to get at the heart of voter apathy in Florida.

Florida's recent primary turnout of 17.5 percent, the lowest in the past 16 years, dramatizes the need for a new initiative, said Martinez, who is heading the new TaxWatch Center for Florida Citizenship.

"There is a lot of work to be done," said Martinez, who spoke at the press conference Wednesday sponsored by TaxWatch, which also announced the release of its 2014 election guide.

"I don't know that we'll come up with a silver bullet but that's not the point," Martinez said. "The point is identifying why voter participation has declined."

Martinez acknowledged that negativity in campaigns is one deterrent, especially for the casual voter, but there are plenty of others, including a need for more engagement and the expectation that regular Joes can have an influence on government.

The resolution calls on Scott, lawmakers and Department of Children & Families Secretary Mike Carroll to empanel a committee of “experts to investigate, review and recommend changes in law and policy to protect children throughout Florida from the type of preventable harm that took the life of Javon Dade, Jr." who was mauled to death by dogs outside his father’s Goulds home last month. One of the dogs was a pit bull terrier.

Though pit bulls and similar dogs have been banned in Miami-Dade since 1989, DCF investigators took no action in 2011 when the agency was told Javon was in “danger” because his father kept six dogs, two of them pit bulls, and had failed to train them, the Miami Herald reported. The boy’s father, also named Javon Dade, also had been accused of dealing cocaine out of his house, carrying a gun, and being violent towards Javon’s mother and visitors to their house.

Javon was among about 500 children who died of abuse or neglect in Florida over the past six years after the state had received abuse or neglect reports concerning a caregiver. Their stories are detailed in a Miami Herald series, Innocents Lost. Full story by Carol Marbin Miller here.