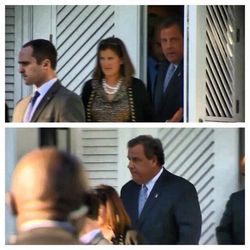 New Jersey Gov. Chris Christie hasn’t had a winning media day ever since news erupted early last week that a senior staffer and an ally clearly conspired to shut down traffic on a bridge in an apparent act of political retribution.

Saturday was another public-relations loser for Christie, a 2016 GOP White House hopeful, who hid from the press when he flew into Florida for a series of closed-press hush-hush fundraisers for Florida Gov. Rick Scott, one of whose own donors called the secrecy "stupid.” (NOTE: Picture at left courtesty of WFOR/CBS4)

Democratic National Committee Chairwoman Debbie Wasserman Schultz happily filled the void, holding two press conferences in Orlando and then in her congressional district in Dania Beach where she addressed at least seven broadcast TV cameras and even more reporters.

“It’s a little bizarre that Rick Scott would bring the chair of the Republican Governors Association -- something that arguably he should be proud of in a normal situation -- and not brag about it, not show him off, not spend some time in front of the cameras, take some photo-ops and take some questions,” she said.

Once an early GOP frontrunner in the presidential race, Christie’s fortunes have begun to sink. His first impression to national voters has been a public-relations disaster, and Christie’s press-avoiding appearance in Florida is an object lesson in how not to campaign in the nation’s most-crucial swing state. 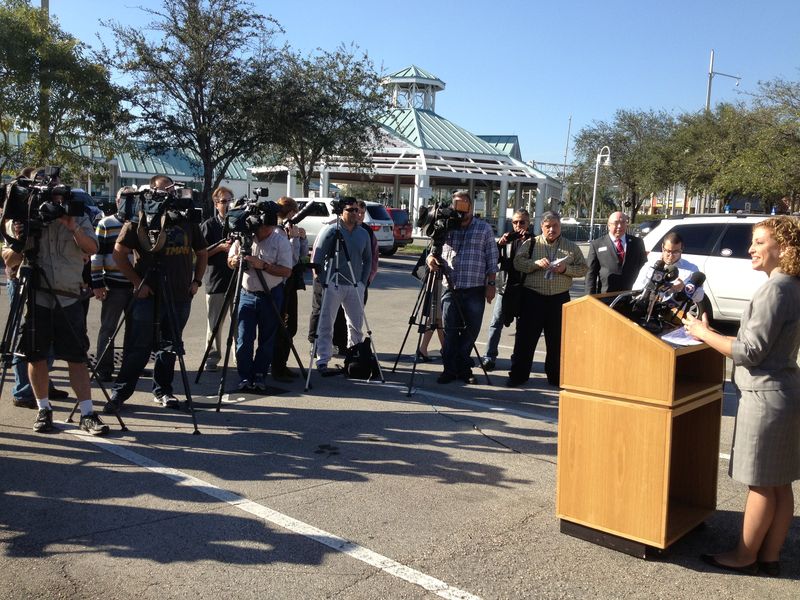 “Whenever you are someone who, like Chris Christie did during that two hour press conference, has to say ‘I am not a bully,’ then you know you probably are a bully,” Wasserman Schultz said.

Earlier in the day, during a Palm Beach fundraiser, CBS-4 captured Christie on video leaving the event. Christie looked at the camers, looked away and slipped away without taking a question.

Wasserman Schultz’ line repeated by TV stations in Orlando and the Miami-Fort Lauderdale media market: “It’s great to be here to welcome Chris Christie to the Sunshine State. It’s not everyday we get to welcome a governor whose scandals burns so brightly they outshine even those of our own scandal-plagued governor, Rick Scott.”

“Gov. Christie and Gov. Scott really do have a lot in common,” she continued. “They both seem to have a loose definition of ethics and of knowing what’s right and what’s wrong. And they both know a thing or two about creating massive traffic problems for their constituents.”

As it regards Scott, that last reference by Wasserman Schultz was to the governor’s decision to cancel federal money to help build a bullet-train between Tampa and Orlando. Though Scott’s decision there outraged some voters and political leaders in the crucial Interstate 4 corridor, there’s simply no comparing it to what Christie’s staff did.

While the venue had symbolic significance, the acoustics were horrible. Right next to I-95 and the airport, the train station was noisy. It was tough for bystanders to hear what she was saying. But it didn't really matter. The seven microphones and handful of print-reporter recorders on the podium picked up every zinger in two of the state's largest media markets.

And the silence by Christie, Scott and other top-notch Republican officials was conspicuous in its absence.