« UPDATE: After all that, is Precourt out of a job? | Main | Brown blasts lawsuit aimed at dismantling her district » 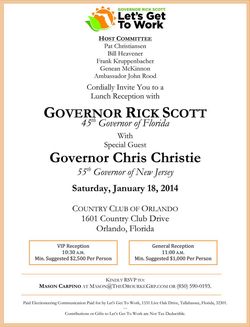 New Jersey Gov. Chris Christie is coming to Florida to help fundraiser for FL Gov. Rick Scott in Palm Beach, Fort Lauderdale and Orlando. The venues are like a state-held secret now that Christie is taking fire over "Bridgegate."

But word of the locations is leaking out anyway (see below). And Scott supporters are shaking their heads in the meantime about the secrecy that, they say, is being insisted upon by Christie's political handlers.

"This is ridiculous. It's stupid, amateur hour," said one major Scott donor, who plans to attend at least one of the events. "They took a little story and made it into a bigger one than was necessary. Trust me, this isn't Rick making this a state secret."

What we know of the closed-press events:

The Palm Beach fundraiser is slated to be held later Saturday (time unclear) at the private residence of Jose F. "Pepe" Fanjul, Jr., who runs the Florida Crystals empire.

The Broward event will be held Saturday at 6 p.m. at the home of lobbyist William D. Rubin, a longtime friend of the Florida governor who lobbied for the Columbia/HCA hospital chain when Scott ran the company. Rubin is such a loyalist that the longtime Democrat switched to become a Republican in 2010 to vote for Scott in the GOP primary.

Amid all of this, there's also a Christie meet-and-greet to be hosted by Kenneth Langone, Home Depot co-founder and North Palm Beach-area property owner, according to the Palm Beach Post.

Note: the latter two fundraisers are based on word of mouth from sources. The hosts won't comment or can't be reached. The Orlando event is pretty certain because we actually have the invite (the only one available to the press).