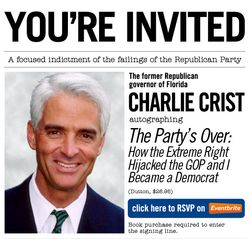 Former Gov. Charlie Crist is scheduled to sign copies of his new book, The Party's Over, 7 p.m. Tuesday at Books and Books in Miami Beach.

And the Republican Party of Florida is waiting.

RPOF is welcoming Crist back to what the GOP is calling the "scene of the crime:" -- South Florida, where one-time Crist donor Scott Rothstein pulled off his mammoth Ponzi scheme. Crist, who once attended Rothstein's wedding at the Versace mansion on the beach, has taken to calling the convicted fraudster a liar now that Rothstein recently testified that Crist essentially sold judicial appointments. 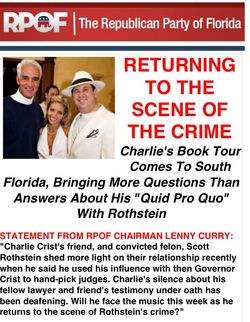 Not a helpful story to break as Crist runs as a Democrat for his old job back.

Yet so far, except for a bad day-and-a-half news cycle over Rothstein's claims, Crist has been on a public-relations roll. He and his book have been featured on influential shows like MSNBC's Morning Joe, Comedy Central's Colbert Report and HBO's Real Time with Bill Maher. For the newly minted Democrat who's going to be badly outspent by Republican Rick Scott, the free media has been an equalizer.

Mathematically speaking, The Party's Over > Rothstein's claims. But the campaign is young.