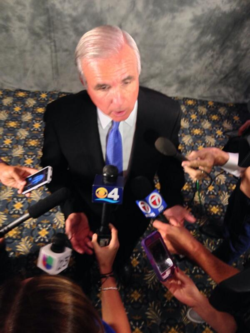 Miami-Dade Mayor Carlos Gimenez threw his support Wednesday behind a convention center in downtown Miami, saying the county could use another major conference space in addition to the Miami Beach Convention Center.

Gimenez revealed his support as part of a wide-ranging “state of the county” speech in which he acknowledged challenges over the past year. He tried to portray those challenges as new opportunities for county government to become more efficient.

“Our last year was difficult,” he told a packed house at the Milander Auditorium in Hialeah. “And I don’t mind getting some battle scars along the way.”

The mayor appeared keen on taking on his critics, who have accused him of being aloof and short-sighted, by maintaining an upbeat tone and mentioning big-ticket projects still far off in the future.