Gov. Rick Scott accused President Obama on Friday of “doing the wrong thing” by not quickly and vocally proposing sanctions against the government of Venezuela for suppressing protestors.

Democrats were quick to accuse Scott of trying to score political points in South Florida’s burgeoning Venezuelan community and of ignoring efforts by the Obama administration to negotiate with Caracas.

“We should clearly freeze the bank accounts of Maduro and his gang,” Scott said. “Stop the travel visas — don’t allow anybody who’s impacting these protestors, peaceful protestors — from coming into our country. They should never be able to come into our country.”

Scott also said the president should do what he and Rubio did on Friday: Visit Venezuelans in communities like Doral, where the Republican governor and senator addressed a packed crowd at El Arepazo 2 restaurant, along with Lieutenant Gov. Carlos Lopez-Cantera.

“The president needs to show up,” said Scott, noting Obama is scheduled to visit the Miami area on March 7.

Will Clinton accept her nomination in downtown Miami?

Miami on Friday joined the hunt to host the Democratic National Convention in 2016.

That event could bring one of the most closely watched acceptance speeches in history, if a certain former secretary of state proves the pundits right and jumps into the presidential race.

Freddy Balsera, who helped shape the Obama campaign's media message to Hispanic voters, is organizing the push and will head up the committee pursuing the event. Miami-Dade is offering Democrats the county-owned AmericanAirlines Arena, which seats about 20,000 people for basketball games.

For Miami to be the host, organizers would have to raise at least $50 million, a sizeable sum given that reports of a $20 million tab for Super Bowl raised eyebrows throughout the region last year.

On Friday, key players cautioned that they're still deciding whether it makes sense to host the convention. Once the Democratic Party releases details on the hosting requirements, the final pricetag will come into focus.

"Specs out soon,’’ Miami-Dade tourism chief Bill Talbert wrote in an email. “Will take a look and then make a decision.”

Read the story by clicking here.

TALLAHASSEE — State officials who prematurely celebrated a new unemployment benefits website are claiming now that the defects that kept thousands of Floridians from getting benefits since October are mostly fixed.

Officials with Gov. Rick Scott's Department of Economic Opportunity who oversee the CONNECT project say the number of jobless claims stuck in the system for more than a week dropped from more than 58,000 to fewer than 5,000 last month.

"The numbers speak for themselves," said CONNECT project manager Tom McCullion this week. "We're just in a phenomenal position today serving our claimants."

Yet most of the improvement has nothing to do with DEO, said Alí R. Bustamante, a professor at Florida International University's center for labor research.

"That accounts for the drop," Bustamante said. "There was a lot of confusion last month, and a lot of people didn't know what the limit for unemployment compensation was. They know now, so they aren't filing claims. So, from the system's standpoint, it really helped that these claims just went away."

This issue has received scant attention, likely because Florida's Republican leaders would rather not talk much about their decision to ask the federal government for more Medicaid dollars even as they rejected Medicaid expansion.

But U.S. Rep. Kathy Castor, D-Tampa, brought up the state's cash grab in a letter to House Speaker Will Weatherford and Senate President Don Gaetz today where she implores them to support Medicaid expansion.

Florida is waiting to hear back from the federal government on its request to expand a pool of money funded by state, local and federal Medicaid dollars to provide health services to the poor and uninsured. The $1 billion "Low Income Pool" (LIP) program would be combined with other Medicaid funding streams and be renamed the "System Access and Transformation Incentive Fund."

"This is ironic to say the least," Castor wrote. "It is ironic because the LIP was established to ensure continued government support for the provision of health care services to Medicaid, underinsured and uninsured populations.  So on one hand, the State is blocking Medicaid funds, but on the other, the State has its hand out for billions of dollars of Medicaid funds."

Gov. Rick Scott has appointed Heather Brinkworth of Fort Lauderdale to fill a vacancy on the  Broward school board today.

Brinkworth, 45, is a regional program manager for the Barbara Bush Foundation for Family Literacy and previously worked as a reading teacher at Stranahan High School and Lauderhill Middle Community School. Brinkworth has served as chair of the Fort Lauderdale’s Education Advisory Board and as PTA president at Bayview elementary school.

Brinkworth replaces Katie Leach who quit late last year due to her husband’s job prompting her to move out of state. Her term starts today and ends Nov. 18. So far, no candidates have filed to run for the district 3 seat.

“Heather’s dedication to serving students makes her a great choice to serve on the Broward County School Board,” Scott said in a press release. “I am confident that she will continue her work to provide the students of Broward County with a great education.”

Brinkworth first registered in Broward in 1986 as a Republican and switched to independent in 2000, according to Broward election records. On Oct. 22, she changed her registration back to Republican. Leach announced she was stepping down in October.

Technically school board members run non-partisan -- the majority of the board is Democrat.

Brinkworth had the backing of Leach and one of the most vocal past Republican elected officials in Broward: former state sen. Ellyn Bogdanoff.

Judge accepts settlement that strips Miami's homeless of some rights

U.S. Judge Federico Moreno on Friday approved changes that will strip the homeless of some of the life-sustaining rights they were granted through a historic settlement reached in Miami almost two decades ago.

Police will now be able to stop homeless people from building fires in parks to cook, or from building makeshift tents to sleep in. The homeless can still sleep on sidewalks, but not if they block the path of pedestrians.

If a homeless people are within a quarter-mile of a public restroom, they can longer expose themselves to relieve themselves or to clean. And convicted sex offenders who are homeless will no longer receive the same life-sustaining benefits as other homeless people.

Scott said he first brought the issue up Monday during a National Governors Association meeting in Washington D.C. In his letter, the governor added that Obama should visit Venezuelan families in Miami when he visits town March 7.

Later Friday, Scott has scheduled an event in Doral with Sen. Marco Rubio to express solidarity to Venezuelans.

"We must target regime officials with sanctions, such as freezing the bank accounts of Maduro and his gang and revoking the U.S. visas of anyone involved in attacking peaceful demonstrators. We must stand squarely for liberty and democracy and against the forces of oppression and tyranny," Scott wrote. "It is also my hope that you will use all diplomatic measures to denounce the unjust arrest and treatment of the peaceful pro-democracy leader Leopoldo López.

"Additionally, with your planned visit to Florida in March, I would like to encourage you to visit the community of Doral to hear the stories of freedom loving families who are concerned for the safety of their loved ones in Venezuela."

Will Crist speak at Broward Dems' big event? Who knows, but the new keynote speaker should be announced on Monday

Schultz cancelled his speech after Huffington Post contacted the network about it.

“He was not told it was a fundraising event,” network spokeswoman Lauren Skowronski told Naked Politics.

It’s difficult to believe that Schultz had no idea the purpose of the event because media routintely describe it as the group’s main fundraising event of the year.

In the past, the group has drawn some high profile speakers including Hillary Clinton, Cory Booker and Terry McAuliffe.

The other mystery about the event: whether former Gov. Charlie Crist who hopes to unseat Republican Gov. Rick Scott will speak. Leaders of Crist’s campaign haven't responded to our questions about whether he will speak. Broward has the highest number of registered Democrats in the state so it's hard to imagine that Crist would skip the event, considered the group's most important of the year.

Broward is the home turf of former state sen. Nan Rich of Weston who is running an underdog campaign against Crist in the Democratic primary. Rich describes herself as the “true Democrat” in the race unlike the GOPer-turned-independent-turned-Democrat Crist. While many Broward Democratic activists are publicly loyal to Rich, they want Scott ousted by a Democrat and are certain to line up behind the primary winner.

In 2010, the Democrats' candidate for governor Alex Sink was criticized for not appearing in Broward early enough and often enough -- and they repaid her with a lousy 41 percent countywide turnout and she lost to Scott.

Posted by Amy Sherman at 10:33 AM in Broward Politics, Charlie Crist | Permalink | Comments 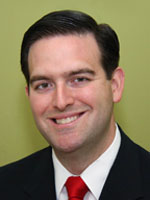 For the second year in a row, a state lawmaker from Florida has been named one of 10 rising conservative stars under 40.

Diaz will be honored at the Conservative Political Action Conference, which begins on March 6 in Washington, D.C.

"Being selected for this honor is an amazing opportunity to showcase that conservative solutions advanced by Republican members of the Florida legislature can serve as a model to address our country's very real issues," he said.

The Wesley Chapel Republican used the platform to oppose a federal expansion of Medicaid.

"Here's the bottom line: It's time for the states to take a stand," Weatherford told the crowd of conservative activists.

Diaz will have the opportunity to speak on March 8. He plans to talk about diversity and the Republican Party, he said.

"It's a huge platform," he said. "I will talk a little bit about who I am, where I come from, and how I see Hispanics playing a role in the future of the party."

While the list of all 10 honorees has not yet been released, Diaz said he would not be surprised to see another Floridian make the final cut.

"There are a lot of talented people in this state," he said.

Tackling a priority of House Speaker Will Weatherford, Rep. Dana Young, R-Tampa, filed legislation Thursday to address the rampant suspension of driver licenses in Florida, in many cases for non-driving related infractions such as a drug conviction or non-payment of child support.

"Many Floridians cannot drive to work and afford to pay the mountain of fines associated with a suspended or revoked driver license," Young said. "For these individuals, losing a driver license creates a barrier to staying employed and providing for their families."

A report by the Legislature's research arm, OPPAGA, noted that more than 685,000 Florida drivers had their licenses suspended for the 12-month period that ended last June. Data from the state motor vehicle agency showed that Miami-Dade, the most expensive place to live in Florida, had 137,000 suspended drivers last year. and that nearly three times as many of them were black as were white. Most of the remaining drivers were Hispanic.

Young's bill, HB 1181, would prohibit judges from suspending for a first offense of failure to appear in court on a worthless check charge, and give a judge discretion to issue a suspension on subsequent bad-check offenses and for misdemeanor theft charges.

Her bill would reduce from two years to one year the suspension for a drug-related conviction, while allowing the drug treatment and rehabilitation option so the driver can gain reinstatement after six months. A driver who owes support could avoid suspension by beginning to pay the obligation by an income deduction plan, and would allow for consideration of unusual circumstances, such as a driver being on unemployment compensation or incapable of self-support.