« Atty. Gen. Holder calls for end to felons voting ban | Main | Pension reform is back, and so is the opposition » 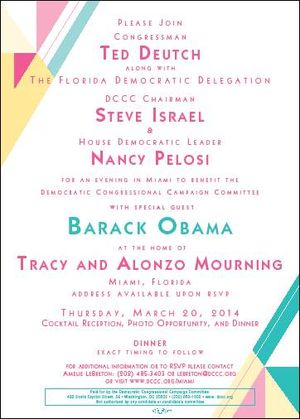 March in Miami. Perfect weather. And an ideal time for President Obama to fundraise for the Democratic Congressional Campaign Committee at the Miami home of former Heat basketball star Alonzo Mourning.

While the House might be tough for Democrats to win back, the DCCC's fundraising receipts aren't showing a struggle, according to Roll Call, which noted yesterday:

The rival National Republican Congressional Committee’s numbers were not bad either, though they did not equal the DCCC’s haul.