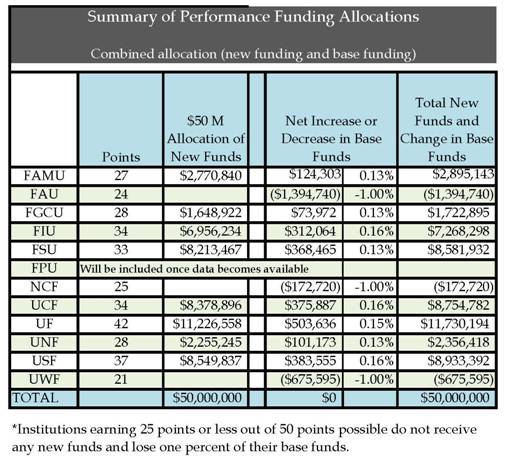 State university system Chancellor Marshall Criser III is making the rounds at the Capitol this week, including a presentation at today’s Senate Education Committee meeting to talk about performance funding.

The 12-university system has asked the Legislature to allocation $50 million in new money to reward schools for meeting various goals, although Gov. Rick Scott’s budget proposal only included $40 million.

Whatever the final amount, it will be divided among the universities using 10 different criteria worth a maximum of 50 points. Universities must earn at least 26 points to get any new funding. Those that earn 25 point or less risk losing 1 percent of their 2014-2015 base funding; That money would then be redistributed to the other high-scoring schools.

We have received a copy of the projections, and the three schools expected to lose money are Florida Atlantic University, University of West Florida and New College of Florida. New College President Donal O'Shea said previously that he is one Pell grant recipient away from getting the extra point needed to avoid a penalty.

The three low-performing schools would all lose varying amounts of money, based on calculating 1 percent of their normal allocation from the state. FAU would be docked $1.4 million, UWF would lose $675,595 and New College would be $172,720 poorer.

Because the amount of performance money is based both on the points a school receives and its existing base funding, there are some weird outcomes in the projections.

For example, both Florida International University and University of Central Florida both were projected for 34 points, but their awards are $7.3 million and $8.8 million respectively. And Florida State University is projected to be awarded $1 million more than FIU, $8.6 million, even though it scored one point less. That is because FIU has a smaller base funding –- which depends on enrollment and historical allocations from the state -- than the other two schools.

1. percent of bachelor's degree graduates employed or continuing their education

3. Cost to university per undergraduate degree

7. Percent of undergraduates with a Pell grant (university access rate)

8b. For New College only since it doesn't have graduate programs: Freshman in top 10 percent of graduating high school class

9. Board of Governors choice for each school

10. Board of Trustees choice for each school