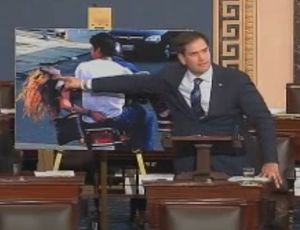 The U.S. Senator from Florida had listened patiently to Sen. Tom Harkin of Iowa speak favorably about his recent trip to Cuba, all the while omitting any real references to the oppression of the totalitarian government there.

To Rubio, like many Cuban exiles and their descendants, it was too much to bear.

This wasn’t some Cold War-era fulmination about Castro’s regime.

Rubio’s speech was about current events: the protests in Venezuela, the Maduro government and the ties it has with the Castros, who repress their own people and helped inspire the suppression in Caracas.

Venezuela is becoming the new Cuba.

For 14 minutes and 16 seconds, Rubio gave the best oration of his political career, speaking largely off the top of his head and with only the barest of notes. Rubio sometimes dripped with sarcasm or simmered with indignation as he made the case to Congress that the United States needs to continue Cuba sanctions and punish Venezuela.

Over the next few days, Rubio said, he’d propose sanctions “we should be pursuing against the individuals responsible for these atrocities.”

Rubio said it’s “shameful” that the United States and Congress haven’t done more to denounce or punish the government-sponsored violence in Venezuela.

As an aide flipped through over-sized photos of Venezuelan protests, Rubio ticked off the struggles of living in the country, the horrors of its citizens dying and being jailed at the hands of its government.

“This gentleman here is the former mayor of a municipality in Caracas. His name is Leopoldo Lopez,” Rubio said. “And this is the National Guard of Venezuela pulling him into an armored truck last week. You know why? Because he’s protesting against the government.”

Then came the next photograph, a picture of a young woman being driven off on a motorcycle.

“This is Genesis Carmona,” Rubio said. “They shot her in the head. She died last week.”

Rubio continued: “Let me show you the next slide. Here’s a demonstrator detained by police. Look how they drag him through the streets. This is in Caracas, Venezuela.”

Rubio also took issue with a recent survey, cited by Harkin, that indicated a thaw in American and Floridian perceptions of relations with Cuba.

“He cited a poll, ‘More Americans want normal relations with Cuba.’ So do I — a democratic and free Cuba,” Rubio said.

“But you want us to reach out and develop friendly relationships with a serial violator of human rights, who supports what’s going on in Venezuela and every other atrocity on the planet? On issue after issue, they are always on the side of the tyrants. Look it up,” Rubio said. “And this is who we should be opening up to? Why don’t they change? Why doesn’t the Cuban government change? Why doesn’t the Venezuelan government change?”

Rubio said that, just as the United States has sanctions against North Korea and Syria – allies of Cuba – it should keep pressuring the governments in Havana and Caracas.

And he disagreed with the notion that the embargo hurts the Cuban people. Instead, he said, it’s the totalitarian-socialist government that’s to blame for problems in Cuba – as well as in “oil-rich” Venezuela.

“We don’t have an embargo against Venezuela,” he said. “They have a shortage of toilet paper and tooth paste. Why? Because they are incompetent. Because communism doesn’t work. They look more and more like Cuba economically and politically every single day.”

Rubio repeated that last line elsewhere in his speech:

“They look more and more like Cuba economically and politically every single day. What’s the first thing the Venezuelan government did when these broke out? They shut off access to Twitter and Facebook and the internet. They ran CNN out of there. They closed down the only Colombian station. Years before, they had closed down all the independent media outlets that criticized the government.

“Where did they learn that from? From Cuba. And yet we have to listen to what a paradise Cuba is.”

Rubio also said members of Congress who visit Cuba should ask the regime tough questions about dissidents and protestors.