« PolitiFact examines John Morgan's claim about a pot arrest | Main | Did Sink get outspent in GOP district? Not really »

Askew and Hatchett: Wit and wisdom before Leadership Florida 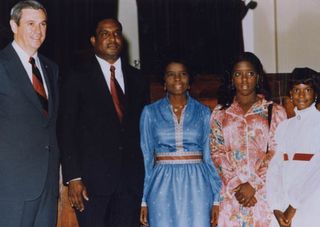 For years, former Gov. Reubin Askew had a regular invitation to the annual meeting of the Leadership Florida class in Tallahassee where he was asked to speak with Joseph Hatchett, the former federal judge whom Askew appointed the state's first black Supreme Court justice.

It was affectionately known as the "Joe and Rube show." Here's a summary of their dialogue on Jan. 19, 2012. (We hope to post the podcast later):

Askew introduced Hatchett as "a man with a good heart" and noted how Florida is "blessed" because of his willingness to take the job.

Hatchett, who as a young law student was banned from staying in the hotel where the bar exam was being held, went on to become the chief judge on the federal bench for the Southeast region.

He recalled how someone once said to him, "You were forever a risk taker, and I said that's the only way I wanted the job. You just do it and take your chances."

Among his chances was his stand on integration: "I really was so tired over the hypocrisy of the busing situation because it never became a controversial issue until we started busing white children."

After he stood up in favor of integrating schools, the Democratic Party took a poll and his numbers rose. "A lot of people who opposed busing, they weren't racists but there were enough other racists to make up for it."

Askew was elected governor in 1970, defeating Republican Gov. Claude Kirk. They subsequently became friends. "It's amazing when you stop running against each other how friendly you can become."

As the first governor to introduce comprehensive growth management laws, Askew said, "One of the reasons I ran is I really felt like we were killing the goose that laid the golden egg by developing all around."

On his governing philosophy: "One of the great problems we have with people running for office is that -- and this sound corny but it's true -- my ambition was not just to get elected governor. My ambition was to get elected in such a way where I could do things. If there was anything i felt good about in my eight years as governor was really I wasn't obligated to a living soul."

When Hatchett was appointed, justices still had to run for election on the statewide ballot -- a situation Askew eventually persuaded voters to change with the introduction of merit retention for appellate courts and judicial nominating commissions for appointments.

He described how he "could not have been elected" without Askew, who first appointed him to the court in 1975 but "turned over his entire organization over to him for him to win election" when his "poll numbers were zero."

Hatchett said he figured he would never win election when it was up a year later. "I thought there's nothing wrong with being on the court 15 months before being thrown off."

And, he notes, it was also the last time -- with the exception of Jennifer Carroll -- an African American has been elected to a statewide office in Florida. "If we could do that in 1975, you can do it in your communities today."

In the 1970s, "things we take for granted now were not in existance. For example, financial disclosure. Public officials did not make any financial disclosure until Askew came along and pushed that through." Same with the corporate income tax. "He kept us very busy on the court, I can tell you that."

Askew was asked what was his proudest accomplishment: "What I enjoyed the most was bringing people into their own government" appointing African Americans, Hispanics and women to public office, "people who were systematically, intentionally" kept from voting.

"Government, if it isn't responsive in a fair way then how can you convince young people that they should abide by the decisions of it," he said.

During the swearing in ceremonies for Hatchett and Jesse McCrary, a black civil rights activist whom Askew appointed Secretary of State, the first African American to serve on the elected Cabinet, Askew  recalled what was going through his head. "The whole time he was talking I was thinking about their mamas. How they must have felt seeing history breaking."

Askew noted that he also appointed more black judges to the bench than anyone before or since.

He was asked about being raised in a single parent home, after his mother divorced his alcoholic dad when he was age three.

"There's nothing wrong with being poor,'' Askew said. "It's a terrible inconvenience." But, he added, that "a country that's as wealthy as this country -- in spite of our big deficits -- cannot go on the cheap in terms of trying to help people who are trying to help themselves."

So for him, his positions against inequity and civil rights came naturally. "I wasn't out there marching with Dr. King but I made up my mind that I was going to do, at every turn, what was necessary."

"We have to recommit ourselves to being fair,'' he said.

His mother's guidance made him "a fortunate man,'' Askew said. And he told of his "little devotional every morning" and how "I say hello to her every morning. Daddies are nice but mamas are mamas."

Askew and Hatchett also spoke about the Florida Supreme Court's flawed reasoning in rejecting Virgil Hawkin's admission to the University of Florida in 1949 and the importance of the federal ruling in Brown v. Board of Education.

Askew said his presidential campaign in 1984 "was the best kept secret" and he ran "when no one was asking me to run."

With President Obama's election, "you've got a lot of people voting against him who never have forgiven him for winning."

Askew spoke of his support for the redistricting amendments adopted by voters in 2010, and noted his efforts to end the rural control of Florida's legislature in the midst of urban growth. He said he was encouraged by the prospect that the Legislature might ease back the protections for incumbents and parties but he didn't expect it to happen all at once.

"The only thing I can tell you, that they'll do it incrementally,'' Askew said. "You have to think ahead. It's just like Christianity vs. Islam. We think about the founding of Israel in 1948. The muslims, they think about the Crusades. It's how you look at history."

"It won't be all that you might want but it will be a lot better than it was when there were 38 senators and 29 of them dominated when I first got in,'' he said.

He urged Republicans "to stop flexing their muscles. We all know they've got the majority and what they need to do now is start realizing they have a heavy responsibility to the state."

He said that while he may have been in the majority party during his time in office, as a Democrat representing Pensacola in the state House and Senate for 12 years, he was in the minority "because I was convinced we had to do something about reapportionment and it was a bad name on, a pox on the whole house, and they refused to do that."

Askew said the state "made a terrible mistake" when it imposed term limits in 1994. "The House of Representatives isn't quite the deliberative body that it was for many years because some of them, I've been told, they actually start running for leadership... before they ever get sworn in to begin with. That's not really a good situation."

He noted he was disturbed by the effort to manipulate the judicial nominating commissions by previous governors and legislators, a system Askew installed to remove the political influence from the court appointment process.