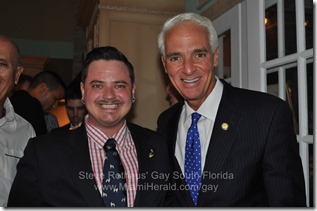 After his five-minute speech, which you can watch here, Crist stated why electing him governor would be good for LGBT people in Florida:

"One of the most important things we can do is get a law on the books in Florida that recognizes the kind of things that President Obama is talking about. And that simply is why not have marriage equality throughout our country," Crist said.

"Certainly, we ought to have it in Florida and I believe that we win this election Nov. 4, we get some other progressives elected in the Florida House and Florida Senate, we’re going to have a great opportunity to get that done, and I look forward to the day we do."