Jeb Bush returns to Tallahasssee to fundraise with Weatherford, Crisafulli..... 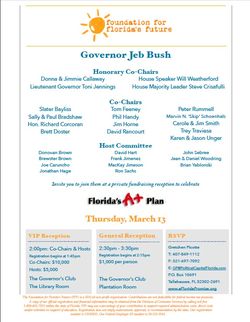 Former Gov. Jeb Bush had a love-hate relationship with the town he sometimes called "Mount Tallahassee."

File this under the "love" category: A Thursday March 13 fundraiser for his Foundation for Florida's Future to "celebrate Florida's A+ Plan," one of Bush's educational legacies.

Tallahassee's the perfect place to pick up checks at this time of year: lawmakers are generally forbidden from fundraising during the 60-day lawmaking session. But lawmakers can raise money for other causes. So the invite is a who's who of top lawmakers: House Speaker Will Weatherford, future Speaker Steve Crisafulli, future-future Speaker Richard Corcoran.