The Democratic Congressional Campaign Committee is launching the first phase of a sweeping nationwide paid effort – “Battleground: Middle Class” – to communicate with voters in Florida that Candidate Carlos Curbelo’s new Republican budget is selling out the middle class in favor of special interests and the ultra-wealthy.

The “Battleground: Middle Class” project will reach voters through paid advertising, efforts to connect them to their representatives and field efforts in their neighborhoods and at their homes.

Carlos Curbelo and House Republicans’ new budget was unveiled Tuesday, and highlights include: raising taxes on middle class families, ending the Medicare guarantee for seniors and turning Medicare into a voucher program, and costing our economy 1.1 million jobs next year alone – all while heaping tax breaks on corporations that ship jobs overseas.

“Carlos Curbelo’s new Republican budget is the clearest illustration yet that he is not on the side of Florida’s middle class families – Curbelo’s Republican budget rewards the special interests and the wealthy who need help the least, and does it on the backs of the middle class,” said Josh Schwerin of the Democratic Congressional Campaign Committee. “The people of Florida cannot afford Curbelo’s reckless budget that costs jobs, threatens middle class families’ financial security, raises their taxes, and ends the Medicare guarantee for Florida seniors, while giving more handouts to the corporations and special interests that are shipping our jobs overseas.”

While I'm pleased the DCCC has recognized that I'm going to win this election, the budget does not yet have my input. That will come next January, after we've defeated Joe Garcia and put an end to the scandals and the embarrassment that he has caused our community. Joe Garcia and the DCCC's baseless attacks and shallow talking points aside, I would vote for any budget that helps create jobs and rewards hard work, protects Medicare for seniors, and stops immorally piling debt on my generation and on my daughters' generation.  While I have not fully reviewed this budget I'm inclined to support it.

“I have fully reviewed the Ryan budget, and it’s a disaster for America. It raises taxes on middle class families and lowers taxes on the wealthy. It turns Medicare into a voucher program, and puts the hole back in the Medicare Part D donut. It does the opposite of protecting Medicare for seniors. It is a big giveaway to wealthy donors, and anyone who does even a cursory review of this budget should reject it out of hand. I will never hesitate to oppose a budget that harms seniors and the middle class.“ 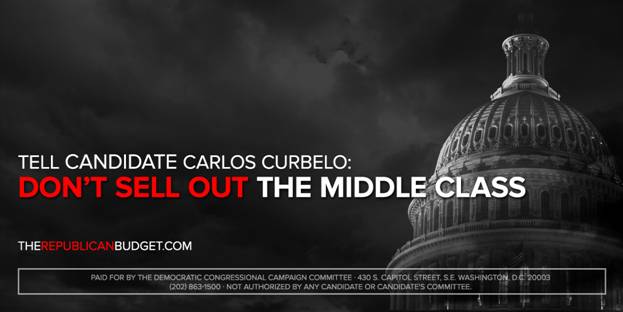