Greyhounds have a quiet, but powerful, advocate in Vicky Gaetz 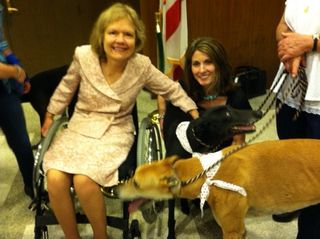 Vicky Gaetz, the wife of Senate President Don Gaetz and mother to House Rep. Matt Gaetz made a rare appearance Tuesday at a press conference to show her support for a bill to be heard on Tuesday to end the requirement that dog tracks operate live racing to keep their slot machine and poker permits.

She also did something very unusual for a Gaetz. She didn't speak. Unlike her husband and son, she's not good at it, she told Herald/Times, as her eyes welled in tears of sympathy for the dogs.

"If I tried to speak I would be sobbing,'' she said. "In a civil society, it doesn't seem right to have these noble animals be caged and forced to race when they don't have to be.''

The bill will be up for a vote in the Senate Gaming Committee this afternoon.

Gaetz uses a wheelchair after suffering from complication when giving birth to her daughter that rendered her a paraplegic. Although her husband and son are supporters of the bill to "de-couple" racing from the gambling permits she said she has not had to push them to be supporters. Gaetz said she has long been an animal lover, has adopted four rescue cats and has been a supporter of humane societies throughout the state.

"I've not pushed either of them in this direction,'' she said but added she's proud that her children have adopted their own rescue pets. "A child raised in our househould would be naturally inclined to love animals."

Photo: Adopted greyhounds with Vicky Gaetz with Kate MacFall of the Humane Society of the United States in Tallahassee.