Lawmakers haven't given up on Uber bill 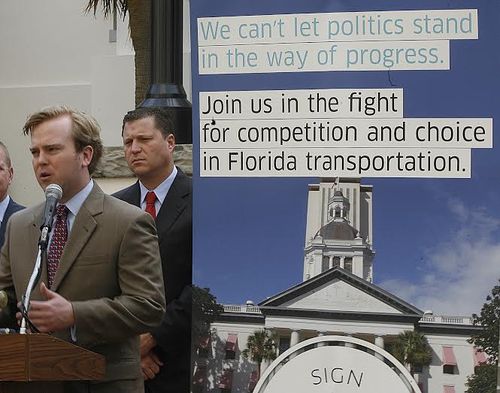 Uber operates in Jacksonville, but has been blocked by local governments in other cities.

The bills (SB 1618/HB 1389) were scaled back during the session. Now, they would enable Uber to operate in Tampa by limiting the power of the Hillsborough Public Transportation Commission. No other government bodies would be affected.

"We shouldn't be a laughing stock for our refusal to embrace innovation," he said.

Brandes and Grant held a press conference Monday in hopes of building momentum. The lawmakers were joined by Uber driver Eric Barney, who drove his black Escalade from Jacksonville to Tallahassee. Barney's trunk was stuffed with 13,000 pro-Uber petitions.

Grant acknowledged that the bill has a complicated path forward. Since the Senate version is stalled in committee, Grant will likely need to amend the Uber language onto a separate transportation bill.

"I think you'll see something on the floor this week," Grant said. "We're looking at every option."

Opponents aren't likely to back down. They say Uber should have to play by the same rules as traditional cabs.