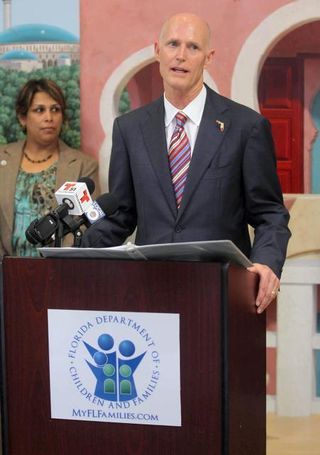 Gov. Rick Scott visited a Department of Children and Families service center in Opa-locka on Tuesday to tout additional funding and staffing for the troubled agency’s child protection system.

Surrounding by child abuse investigators and supervisors, Scott pledged again — as he did earlier this year — to commit about $39 million in new dollars to hire more staff and lower caseloads. He then chastised the Florida Senate for not including the money in its budget but defended gaps in his own child welfare proposal that advocates say leaves holes in the state's safety net.

“I am asking the Senate to do right by our children,” Scott said, after praising the work of local investigators.

The budget increases have come in the wake of a Miami Herald investigation, Innocents Lost, that chronicled the deaths of 477 children over six years whose families had a history with DCF. The Herald review of the state budget over that six-year period also found that as the state budget grew by $10 billion, the resources devoted to child welfare dropped by $80 million.

Senate President Don Gaetz has told reporters repeatedly that that he believes more money is needed for child welfare but has refused to specify if he will go beyond the Senate's initial budget. Senate leaders say the final numbers will be worked out during the negotiating process.

“As such, President Gaetz has communicated this point throughout session, as have the other senators working on this legislation,'' she said. "Final allocations for specific workforce initiatives will be determined in the budget conference.”

But neither the governor's budget, nor the Senate budget, provide any additional money for the support services needed by child welfare organizations to help families receive mental health and drug abuse treatment or parent skills and other services to help them become better parents.

Out of the more than $1.2 billion in new revenue lawmakers have this year, the House proposes $4.6 million in additional money for child welfare services on top of hiring new investigators. The governor and Senate have proposed no additional resources.

Scott deferred to DCF Secretary Esther Jacobo to answer questions about his budget. She said that the agency is now undergoing an analysis to determine where to provide additional funding but made it clear they have no plans to make any recommendation this budget year.

Scott was asked why the people of Florida should wait a year before additional resources are allocated to help at-risk children. He indicated he was in no hurry.

"The right way of budgeting is to find problems and find solutions,'' he said. "Once you find the solution ou can go back and work with the legislature to get the funding. That’s what we’ll do. If we find problems then we’ll work diligently all year to get those done.''

Senate Appropriations chairman Joe Negron said last week that he is determined to fund the program needs to keep children safe but has not committed to putting the money in hiring child protection investigators as the governor has proposed.

"From my point of view, there is nothing more important than doing everything humanly possible to protect children from abuse and neglect,'' Negron, R-Stuart. "So I think you're going to see a strong focus on that issue the last week of session and, based on that issue, where President Gaetz has directed us to go, I think that you will see funding that is commensurate with the commitment that we've made."

What is commensurate with commitment?

"I dont' think we've worked out the exact amount,'' Negron said. "That is something we will resolve in the conference process."

He wouldn't answer whether the total amount for child safety will be capped at $44.5 million in the House budget or include the $25 million advocates are seeking to support services to help parents of at-risk kids get help and treatment.

"I can't predict what the future negotiations will be between the House and Senate,'' he said. ."As you know in conference, sometimes the amounts exceed where the parties were -- sometimes it goes below. I know that we're working together to say what is the financial commitment we need to make to make sure our children are as safe as possible in their homes."