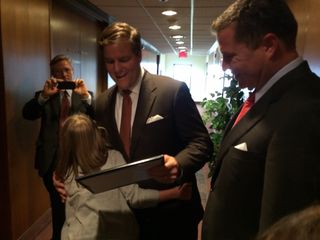 As children who suffer from intractable epilepsy watched in the Senate gallery, the Florida Senate passed a bill 36-3 to allow a limited strain of medical cannabis to be legalized in Florida.

As an indication of the Senate support, the chamber immediately sent the so-called “Charlotte’s Web” bill to the House, where its fate remains uncertain as leaders there raise questions about whether an extract could be made safe enough to distribute.

For RayAnn Moseley, 11, and her parents, the bill, SB 1030, is her last best hope that she could get legitimate access to a marijuana extract that could potentially save her life.

Photo: RayAnn Moseley hands a picture of her handprints, "Ray of Hope," to bill sponsors Sens. Aaron Bean and Jeff Brandes after the Senate passed the bill. Not pictured is sponsor Sen. Rob Bradley.

RayAnn has cerebral palsy and has suffered from intractable epilepsy, a debilitating disease that often takes children before their 20th birthday. She and her mother, Holley Moseley of Gulf Breeze, watched as the Senate debated the measure. They have spent the last four months urging Florida lawmakers to find a way to make a special strain of marijuana that has worked to alleviate seizures of children in Colorado available to their daughter and children like them.

“We’re just trying to bring hope to these families,’’ said Sen. Aaron Bean, R-Fernandina Beach, one of the Senate sponsors of the bill. He admitted that he began as an opponent but changed his mind when he realized that, as a parent, he could see himself in the shoes of parents like the Moseleys.

“If it were your kid, what would you do? You’d go to the end of the world…to make sure your kid gets a chance to have a day without a seizure,’’ he said.

Although the House has not committed to take up the bill, Sen. Rob Bradley, R-Fleming Island, said he was confident the bill would be taken up an possibly modified and sent back to the Senate.

Gov. Rick Scott’s surgeon general has also spoken out in opposition to the bill while the governor has remained noncommittal.

Bean urged his colleagues to remember that the bill does not legalized “the smokeable marijuana that everybody thinks is out there. This is a very low THC product that doesn’t get anybody high,’’ he said. “…It is delivered through an oil underneath the tongue.”

Sen. Alan Hays tried and failed to persuade the Senate to give doctors who proscribe the cannabis immunity from lawsuit.

“What they’re doing is taking a risk that hasn’t earned the title of medicine yet,’’ said Hays, a Republican dentist from Umatilla. “In our desire to be compassionate, which is admirable, we need to guard against the mistakes that may come.”

Sen. Thad Altman, R-Melbourne, said a better approach would be to allow science to test the medical benefits first and then allow it to be legalized.

“Stick to science and vote no,’’ he said. He and Sens. Jack Latvala, R-Clearwater, and Dorothy Hukill voted against the bill.

The bill legalizes only low THC cannibis, which contains no more than no more than 0.8 percent of any tetrahydrocannabinol. It may be dispensed only from a dispending organization and proscribed by a licensed physician in Florida to a patient he lists on the state’s compassionate use registry.

The bill creates a distribution system for marijuana extract that could serve as the framework for the regulation of medical marijuana in the future. Voters will be asked in November to approve Amendment 2, the constitutional amendment to legalize marijuana for debilitating medical conditions, and legislation that passes this session could limit its effect.

The House expands the bill to go beyond helping children with epilepsy to cover patients with Parkinson’s Disease, Alzheimers, post traumatic stress disorder and cancer.

Sen. Rob Bradley, R-FlemingIsland, one of the Senate sponsors of the bill said the Senate is not supportive of adding the other illnesses.

“We have crafted the bill as narrow as we could to help these parents and keep them from going to jail because they’re doing what you would do if it were your child,’’ Bean said.