Political newcomer Jake Rush says he's being unfairly attacked by Congressman Ted Yoho's campaign over his acting and gamer past. Here's part of his statement: 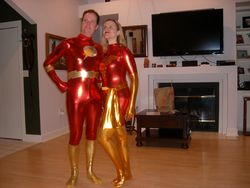 ALACHUA, Fla., April 1, 2014 -- “As a straight shooter, yes, I play and have played video games, role playing games, board games, Yahtzee, Clue, and I have acted in dozens of theatre productions,” states Jake Rush.

“My undergraduate degree is in the classics, and I have been raised with a deep appreciation for theatre, costumes and art,” continues Jake Rush.

“All my life, I’ve been blessed with a vivid imagination from playing George Washington in elementary  school to dressing up as a super hero last Halloween for trick or treaters. Any cursory review of the Internet will show that I have played heroes and villains,” continued Jake Rush.

"I have never hid nor shied away from disclosing my hobby activities. When I was hired at the Sheriff’s
office, I fully disclosed my gaming and theatre background on the application, and these hobbies posed
absolutely no problem or raised any flags. In fact, when applying for undercover work, these hobbies
were considered an advantage, so much so my shift lieutenant nicknamed me ‘Shakespeare’”, continues
Jake Rush.

“As a practicing Christian, I am deeply offended that the opposing campaign and their supporters would take a gaming and theatre hobby and mischaracterize it,” continued Jake Rush. “The very definition of acting is expressing ideas and thoughts that are not your own, just like I don’t
believe I am MacBeth, which I have played, I am none of the characters,” continued Jake Rush.

“The opposition should be ashamed with their game playing; this is yet another example of the
buffoonery that always follows Ted Yoho. In an attempt to deflect from his moral and political failings,
the opposing campaign shamelessly believes he needs to impugn Jake’s character with innuendo,
misleading photos and gossip,” says campaign manager Remzey Samarrai.

“Clearly, Ted Yoho and his supporters want to talk about anything other than his abysmal congressional
record: a vote to fund Obamacare, a vote for the budget, a vote to cut Veterans benefits, and an
isolationist foreign affairs policy. None of which liberal-libertarian Yoho is addressing,” says Alex Patton, general consultant to the campaign.

“Bottom line - There is nothing wrong with being a gamer. It’s kinda nerdy, but North Central Florida
deserves a legitimate debate on the issues instead of Ted Yoho’s usual sideshow distractions,” concludes Jake Rush.