Alex Posada, redistricting mysteryman: 'I misled you and I just wanted to apologize'

In a one-hour deposition in the offices of the plaintiff's attorney in the redistricting case, 24-year-old Alex Posada, whose name was faked as the author of a pivotal congressional map, began with an apology.

"We spoke a few weeks ago - I forget specifically when - but you had asked me if I'd submitted some maps and I misled you and I just wanted to apologize for that,'' Posada said to Vince Falcone, attorney for King, Blackwell, Zehnder and Wermuth, the firm representing the League of Women Voters in the lawsuit challenging the state's congressional maps.

Photo: Posada's Linked In account as entered into testimony

Posada is the pivotal figure in the developing mystery over the legislature's maps. Legislators and their staff testified in the ongoing trial that significant districts from a map submitted under Posada's name became the foundation for the final congressional map. Republican Party of Florida map drawer, Frank Terraferma, has testified that at least seven districts from a congressional map he drew were "identical" to districts that appeared in Posada's map.

Who drew Posada's map and why it was submitted under false pretenses remains a mystery. The voters groups allege in their lawsuit that legislators allowed political consultants to conduct a “shadow” redistricting process that used go-betweens to create public maps intended to benefit Republican incumbents and candidates in violation of the Fair District amendments to the Florida Constitution.

Posada testified in Orlando Thursday that the name and address used to submit the map was his but he never authorized anyone to use his name to submit the maps and, until lawyers contacted him weeks ago, he knew nothing about the redistricting case.
But when Falcone first called him, Posada lied.

"It kind of scared me and you guys started mentioning maps and it just, it just kind of was a knee-jerk reaction,'' he said under oath. 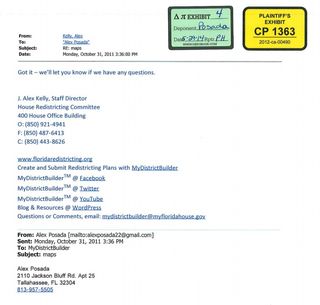 Posada, a 2012 graduate of Florida State University and a member of the FSU College Republicans, attended the June 2011 public hearing held by Legislature but couldn't recall his statement.

Records show he commended legislators for their transparent process and urged them to take their time and not force maps to be completed quickly, as some Democratic groups were seeking. He denied being given talking points or a script.

"I have zero recollection,'' he said, after being shown a copy of his public statement. "I barely recall this statement. I mean, obviously looking at it I can see that I said it. But I barely remember anything about this meeting other than I went to it and I spoke. This, again, this was all while I was in college. I was focused on graduating, you know, getting a job after college and working while I was in college, so, I mean, I don't really remember a lot of this stuff."

He testified that the email used to submit the map in his name in November 2011 was not his but a December 2011 email that used another domain, his FSU account was his -- but he knew nothing of the email.

"I don't have any recollection of ever giving anyone access to my email or redistricting or anything of that nature,'' he said.

Posada testified that he had worked as an intern at the Republican Party of Florida from January to April 2012, and later got a job with Strategos Public Affairs, Republican lobbying firm based in Tampa run by former state Rep. Trey Traviesa and Drew Weatherford, the brother of House Speaker Will Weatherford.

Falcone asked Posada what he did at Strategos Public Affairs, where he worked from August 2012 to August 2013.

"Most of it was scheduling meetings,'' he replied. "I drove my boss [Traviesa] to the meetings. I picked up his girls and drove them to their lacrosse practice. Picked up his lunch."

The deposition was entered as testimony into the trial record.  Download Posada, Alejandro E. 05-29-14

Posted by Mary Ellen Klas on Friday, May. 30, 2014 at 6:24 PM in Florida Redistricting, Redistricting | Permalink