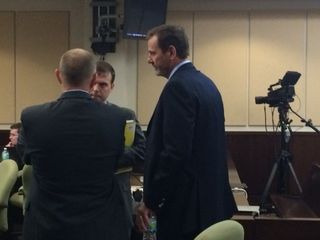 The public and the press were ushered out of Leon County courtroom Thursday in the redistricting trial over the state’s congressional districts during the testimony of Republican political consultant Rich Heffley.

The rare closing of the courtroom during an ongoing trial was authorized by the Florida Supreme Court after an emergency appeal by a coalition of voter groups who are seeking to get 538 pages of documents from GOP political consultant Pat Bainter of Data Targeting entered into evidence during the trial.

Photo: Pat Bainter, right, talks with his lawyers Kent Safriet and Thomas Philpot before testifying in the closed courtroom Thursday.

The Florida Supreme Court ruled 5-2 on Tuesday that Bainter’s documents, which he considers “trade secrets,” could be entered at trial but only if the courtroom is closed to the public and the media. The high court could decide at a later date whether the documents should be opened, but ordered the courtroom closed to avoid further delay in the trial which is scheduled to end next Wednesday.

Bainter’s lawyers, who initially sought the closed courtroom as an option, have appealed to the U.S. Supreme Court to stay the ruling by Florida’s high court. Justice Clarence Thomas is the judge authorized the handle the motion.

The plaintiffs, led by the League of Women Voters and seven Democratic-leaning individuals, accuse legislators of allowing political operatives to conduct a “shadow” redistricting process that used go-betweens to create public maps intended to benefit Republican incumbents and candidates in violation of the Fair District amendments to the Florida Constitution.

Heffley testified Thursday during the open portion of the trial that he never drew any maps but frequently shared those created by Bainter, Republican Party of Florida official Frank Terraferma and GOP political consultant Marc Reichelderfer with others whom he did not name.

He said, however, that he was not aware that any of the maps the consultants produced were submitted by the public and said he did not know Alex Posada, the former Florida State University student who submitted a congressional map that included at least seven districts that were identical to those drawn by Terraferma.

“Yes I shared maps with other people and if they wanted to make modifications they could submit it,’’ he said. But he also denied knowing whether Bainter provided maps drawn by the consultants to Posada and other members of the public.

“He [Bainter] was sharing maps with other people and they were encourage his clients and other people to submit maps,’’ Heffley told the court.

“I didn’t care about Congress,’’ he said. “I wasn’t going to be involved in any congressional races. That wasn’t my mandate. That wasn’t what I was paid to do.”

Heffley said that his contract did not specify any job requirements and he produced no reports but was in frequent contract with Joel Springer, the head of Senate campaigns for RPOF. “They seemed happy. They signed the checks,” he said.

The mystery man in the case so far is Alex Posada, a former FSU student and member of the university’s college Republicans. He submitted the map that became the foundation for the final congressional map drawn by legislators and it has become the most viewed public submission on the House’s MyDistrictBuilder web site.

Posada, who worked for one year at the Tampa-based lobbying firm Strategos Public Affairs after college, is now working in Orlando in the construction industry, said Bill Colletti, a spokesman for Strategos said. The firm was co-founded by House Speaker Will Weatherford’s brother Drew and former state Rep. Trey Traviesa.

Heffley's testimony in the closed courtroom was followed by Bainter's testimony.