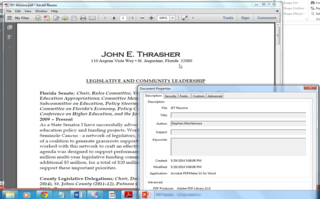 The tech savvy among us know that when you create a new document on most computer programs, you usually leave a footprint. If you downloaded John Thrasher's resume and cover letter we posted here Thursday, you may have made an interesting discovery in the "Properties" field: the PDFs were created on computers registered to Stephen MacNamara.

Thrasher wants to be Florida State University's next president, and he submitted the documents to the school as his application for the job.

He and MacNamara tell the Times/Herald they exchanged emails about the resume and cover letter the way any friend would help a friend who asked for it. They say MacNamara, a tenured professor at Florida State University, has taken no other role in assisting Thrasher as he prepares for a June 11 interview.

But the discovery that MacNamara, an established and controversial figure in state politics with deep connections to FSU, gave Thrasher an assist will only fuel the flames for critics who say Thrasher is being given an unfair, inside track on the job.

MacNamara served as Thrasher's chief of staff during the second half of his term as House speaker, but they actually met years prior when MacNamara was one of Thrasher's daughter's professors at FSU, Thrasher says. MacNamara is a tenured communications professor at FSU. Thrasher said MacNamara is one of many people, some of whom also have ties to FSU, who helped him update his resume and cover letter for the first time in about 30 years.

“His expertise is in communications, and certainly I wanted to make sure that how I was addressing the resume was done in a way that was positive and formatted in a modern way," Thrasher says.

MacNamara took several leaves of absences from FSU over the years to accept political positions. In addition to working for Thrasher, he was chief of staff for Senate President Mike Haridopolos' and Gov. Rick Scott. He resigned from his position in the governor's office in 2012 amid news reports outlining how he steered no-bid contracts to friends and interfered in staffing decisions throughout state government.

MacNamara says he edited to Thrasher's resume and cover letter and later suggested submit them in PDF form instead of Microsoft Word. Thrasher agreed and asked MacNamara to covert the documents for him, which is how MacNamara's named ended up in the "author" field of both PDFs. 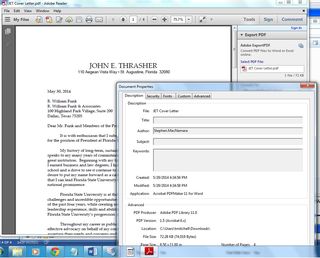 MacNamara said he has not spoken to any members of the search committee on Thrasher's behalf and has no plans to. He dismissed the notion his presence would stoke complaints that Thrasher's political and personal connections are giving him an upper hand.

In fact, MacNamara says he did not agree with the committee's decision to make Thrasher a sole candidate and he believes the search consultant should work harder to find other good candidates.

"I don’t like the process as it's gone," He said. "I don’t know why they can’t assemble a strong list of candidates.”