« Day One of redistricting trial: Reichelderfer endures for 6 hours, focus is his special access | Main | Scott gets budget; most bills haven't reached him yet » 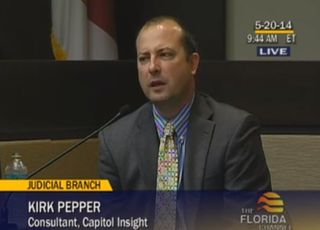 In the second day of the redistricting trial on Florida's congressional maps, Kirk Pepper, the former deputy chief of staff to former House Speaker Dean Cannon, provided a window into the friendly and revolving world between political consultants and legislative staff.

Under oath in the second day of the trial in Leon County Circuit Court, Pepper acknowledged for the first time that he not only supplied maps to political consultant and friend Marc Reichelderfer before they were available to public, he supplied them on two flash drives.

Reichelderfer, a consultant to Cannon, testified Monday that he did not know how he obtained the maps although he did recall receiving some from Pepper. Pepper has since gone to work for Capitol Insight, the lobbying firm founded by Cannon.

Why was it acceptable for a House insider provide the work product of the House legislative staff to a political operative before the public had access?

"In hindsight I wouldn’t do that again but it was intended to help a friend who was cut out of the process [from which] he makes his living,'' Pepper testified. He later elaborated: "I was making him aware of it so that he, as a friend, would know where the political landscape is going the landscape in which he makes his living in. I was trying to do something nice for a friend of mine."

When Cannon learned he had turned over maps to Reichelderfer, after reading about it during the redistricting litigation, “I think he said it was stupid,’’ Pepper said, under questioning from Plaintiff's attorney David King. Pepper has since gone to work for Capitol Insight, the lobbying firm founded by Cannon.

The congressional map drawn by the Republican-controlled Legislature is being challenged by the coalition of voter groups, led by the League of Women Voters and joined by seven Democrat-leaning individuals.

They claim that the congressional map violates the state’s Fair District provisions in the Florida Constitution because it shows lawmakers unfairly intended to give an advantage to incumbents, packs black voters into Democratic seats to benefit Republicans in adjacent districts, and was designed by Reichelderfer and other political consultants to “undermine the public redistricting process.”

“Legislators and staffers collaborated . . . to conduct a separate redistricting process that was not only apart from the public process — but actually perverted the public process itself,” the coalition claims in court documents.

Lawyers for the Legislature argue that the exchange of secret documents between legislative staffers and political consultants is interesting, but it doesn't prove intent to violate the Constitution.
Pepper said he deleted many of his email at the end of each day and even though he knew there would be litigation related to redistricting and after litigation began, he deleted all emails between him and Reichelderfer.
"I had to keep work product that I needed and didn’t see myself having created any work product related to redistricting," he explained.
The testimony provides a window into the chummy world of legislators and consultants, many of whom move seamlessly from campaign to staff routinely in legislative politics.

Pepper said he doesn't know how the maps, created by the House legislative redistricting staff, got onto his office computer in the House. Plaintiff's attorney David King noted that there is no longer a record as to how they got there because the House has erased all record of the information.

"You wouldn’t have done this without Speaker Cannon's approval would you?,'' King asked.

"I did it without Speaker Cannon's approval,'' Pepper answered.

Pepper said that he doesn't recall that "Reichelderfer was specifically drawing maps" and doesn't remember what the consultant said when he received the maps.

Florida taxpayers have spent nearly $2 million defending the Legislature's redistricting maps. The House has spent House $855,296 since July 2012 and the Senate has spent $926,000 on legal costs.

Posted by Mary Ellen Klas on Tuesday, May. 20, 2014 at 10:10 AM in Florida Redistricting, Redistricting | Permalink