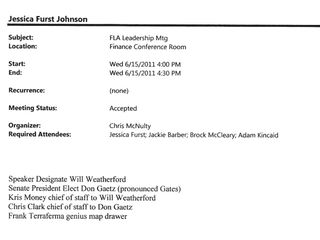 The steady drip of new revelations continued in the ongoing redistricting trial on Friday as a Republican Party of Florida official was called back to testify about a redistricting meeting at Republican National Committee headquarters with Florida legislators.

Frank Terraferma, a RPOF official, testified via telephone in day nine of the trial over the state's congressional maps. Plaintiffs called him after receiving new documents subpoenaed from the RNC and ordered produced by a Washington, D.C. appellate court on Thursday.

Terraferma was asked about an email from Jessica Furst Johnson of the RNC staff that announced a Florida leadership meeting for June 15, 2011 -- before the redistricting maps were drawn and the public hearings on the redistricting process had begun. Attendees at the meeting were listed as: Speaker Designate Will Weatherford, Senate President Elect Don Gaetz, Chris Money, Weatherford's chief of staff, Chris Clark, Gaetz's chief of staff, and Frank Terraferma who was identified as "genius map drawer."

The plaintiffs, a coalition of voters led by the League of Women Voters, had obtained the same email during the discovery process, but the source had redacted Terraferma's name and identification.

Plaintiffs attorney John Devaney asked Terraferma about the meeting at RNC headquaters, and he denied attending or knowing about it. He was asked if he intended to have the maps he drew submitted to the Legislature through private citizens. As he has done previously, Terraferma denied exchanging any maps with private citizens who may have submitted them to the Legislature.

Katie Betta, a spokeswoman for Gaetz, said neither he nor Clark attended the meeting.

The plaintiffs are alleging that Florida's congressional redistricting maps should be thrown out and redrawn because legislators violated the Fair Districts amendments to the Florida Constitution. They accuse legislators of allowing political operatives to conduct a “shadow” redistricting process with the intent to favor Republican incumbents and candidates in violation of the law.

Lawyers for the GOP-led House and Senate deny the claims and say the evidence showing political consultant interest in redistricting does not equate to proof that lawmakers intended to draw maps that favored incumbents or parties.

Gaetz and Weatherford, who served as the redistricting chairman for their respective chambers when the maps were drawn, each testified that they were not influenced by the maps drawn by Terraferma and other political operatives.

The plaintiffs are slowly trying to erode their credibility. On Thursday, they introduced a surprise witness, former FSU student Alex Posada, who testified that a map that was submitted in his name was entered without his consent and the gmail account used to submit it was fraudulently created in his name.

Meanwhile, Devaney told the court there are additional documents from the RNC which have not yet been disclosed and have been submitted to a judge in Washington, D.C. with a privilege log. The judge is reviewing that this afternoon and he may allow additional documents to be disclosed in the middle of the trial. As a result, Devaney kept Terraferma under subpoena.

Posted by Mary Ellen Klas on Friday, May. 30, 2014 at 3:08 PM in Florida Redistricting, Redistricting | Permalink